I used to love eating out at "BBQ" restaurants. I write BBQ in parentheses because this was over 10 years ago, when I wasn't very knowledgeable about food and I thought Tony Roma's fall-off-the-bone and Chili's baby-back-baby-back ribs were the best thing ever. Over time I began to educate myself on food, cooking, and of course, BBQ.

BBQ chain restaurants serves its purpose, feeding the masses who don't necessarily care about the quality and tenderness of the meat. If a BBQ restaurant doesn't have a smoker in their kitchen, in my book that's not real and legit BBQ, which is cooking meat with nothing more than wood and smoke. The same thing applies to grilling. If a restaurant isn't grilling their steak over an open grill, then they might as well use a boring, conventional oven. 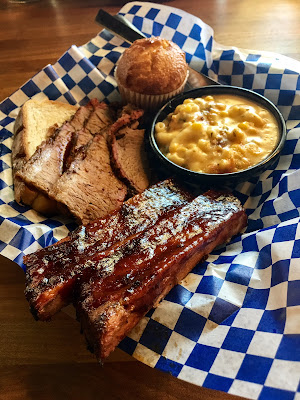 Several weeks ago, I had lunch at Famous Dave's, one of the largest BBQ chain restaurants in the country. Now, I'm not some big-shot food critic or self-absorbed food Instagrammer with thousands of lemming followers (and no, they're not bloggers no matter what they say). There are instances where a restaurant will invite me to one of their media events, but generally I like to keep a low profile, pay for my own food, and dine without any special treatment.

Surprisingly, I enjoyed my meal. I say surprisingly because it was my first time trying Famous Dave's and had really low expectations. Like, mushy-tasteless-nasty BBQ expectations. The thinly sliced brisket had some nice flavor, although it tasted more "roast-beefy" than brisket. The pork spare ribs were good and had a good amount of meat on the bones. They were not overcooked, and the bit of smokiness was a nice complement to the sweetness of the BBQ sauce.