Update: Should I Use Mustard Before Dry Rub?

The other day, I was thinking about something. Why do some people slather a coat of mustard on their meats before applying the dry rub? Is it simply a method of improving the way the dry rub sticks to the meat, or does the mustard itself impart some type of flavor? Why not use something else, like olive oil, hot sauce, BBQ sauce, or heck, how about some maple syrup?

I did some research online, reading forums and articles, and the opinions are widely varied. Some are firm believers of the mustard coat, because it improves the hardening of the bark after such a long period of smoking the meat. The general consensus is that most people use mustard so that the rub adheres to the meat (which I've never had a problem with before). Mostly everyone said that you can't even taste the mustard when the meat is done. 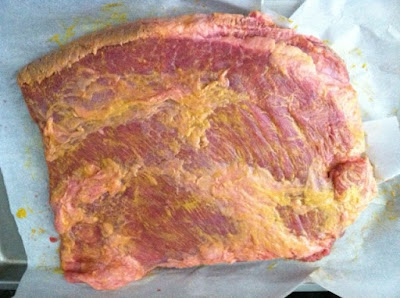 Well there's only one way to settle things, and it's to see for myself. Many people I've seen on television only use mustard for pork butt/shoulder and spare/baby back ribs. Since all I have is a brisket, I decided to use that as my guinea pig (or cow, har har). I just took some plain organic yellow mustard that I had in the fridge and slathered it all over on both sides.

Then, I used a slight variation of my Dirty Smoke dry rub:

I put the dry rub on the top of the mustard-covered brisket, and honestly couldn't tell much of a difference if there was no mustard. The seasonings stuck onto the meat just fine. I wrapped it up in foil and it's in the fridge for now, waiting to be smoked.

So after countless sessions of smoking ribs, pulled pork, and brisket over the past five years since starting this blog -- what's the verdict? The mustard mostly serves its purpose of making it easier for the rub to stick to the meat. That's it. In regards to flavor, if mustard is used on brisket or pulled pork where it requires a long smoke time, then the mustard will burn off and any mustard flavor will have dissipated. However, when used on chicken, which cooks relatively quickly, you will still see and taste some of the mustard -- depending on the heaviness of your rub and sauce.

What about creating a better bark? I've tried smoking meats with canola oil, mustard, or just the rub itself and the best thing you can do to create a better bark is to make sure that you completely dry the meat by damping with paper towels and leaving the meat to come up to room temperature before smoking. There are also various other factors that affect the bark, like the moisture inside your smoker, or type of wood used too.

So there you have it. The question of whether you should use mustard before applying dry rub has been answered. It really all depends on what you like and your preferences. That's the fun of BBQ -- there really is no "wrong" or right away, and you can experiment by trying new recipes and cook methods. What works for one person may not work for you, and vice versa. What has been your experience? Tell me in the comment section below.