Making basic BBQ sauce from scratch is something that every BBQ enthusiast should get into a habit of doing -- you can control your own ingredients, customize the taste and flavor profile so that it is exactly the way you want it. The next step is to introduce different ethnic ingredients like chipotle, Sriracha, or gochuchang. If that doesn't suit your fancy, there's only way to go -- alcohol.

Now, I'm no stranger to concocting BBQ sauces with alcohol. It seemed like only yesterday that I made this killer bourbon whiskey BBQ sauce with Four Roses. Now, it was time to try some different. Enter Templeton Rye whiskey. 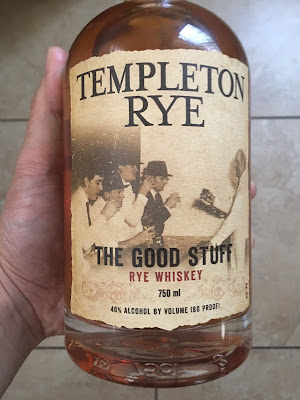 I just knew that the Templeton Rye would be a great ingredient for the BBQ sauce to complement some spare ribs that I smoked last weekend. Pork always lends itself well to a sweeter sauce, so the mellow spice from the whiskey -- along with the subtle caramel and toffee undertones -- would balance out the other ingredients in the BBQ sauce.

Thoroughly mix all ingredients (I like to use a whisk) in a pan over medium-high heat until it comes to a boil, then lower to a slow simmer. 15-20 minutes should do it. You can adjust, add, delete ingredients depending on your personal taste. That's the great thing about making your own BBQ sauce -- it's totally up to you and there's no wrong or right way to do it. 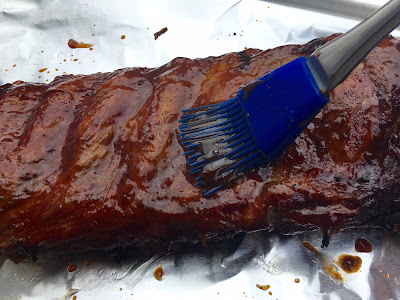 The end result is a Templeton Rye whiskey BBQ sauce that has a rich, mahogany color go along with a smooth flavor profile to complement my pecan-smoked pork spare ribs. The sauce was tangy, sweet, and with just a hint of the whiskey that wasn't too overpowering.

After about three hours of smoking the ribs, I brushed both sides of the spare ribs with the BBQ sauce and wrapped in foil. The ribs can really baste in the sauce with this method. When the ribs have reached your desired tenderness, throw them on the grill for about a minute on each side so that the sugars from the sauce can caramelize and form a crusty, flavorful bark. So good!