There's something about serving and eating prime rib that just screams special occasion. Yes, it's expensive, so of course that has a lot to do with it. But it's also the appearance. A steak comes to the table looking like an blackened and burnt meteor rock. But a piece of sliced prime rib looks luxurious, velvety, and even sensual. Pink, juicy, and just begging to be eaten.

Having used my Weber smoker for over 3 years, it never occurred to me to smoke prime rib. Until now. With an early holiday family dinner scheduled, I told everyone that I was in charge of the main course. There was no doubt in my mind that I was going to serve the juiciest, most flavorful, and tender prime rib ever. EVER. Okay, maybe that's stretching it. But it was gonna be damn good.

I started shopping right away to look for beef ribeye roasts and how much they would cost. Costco doesn't have the cheapest prices out there, but I didn't want to drive around all day comparison shopping. Once I decided that Costco was going to be it, I had to decide if I was going to buy USDA Prime or Choice. Since prime is the creme de la creme, it was $18/lb. Choice came in at $11/lb. 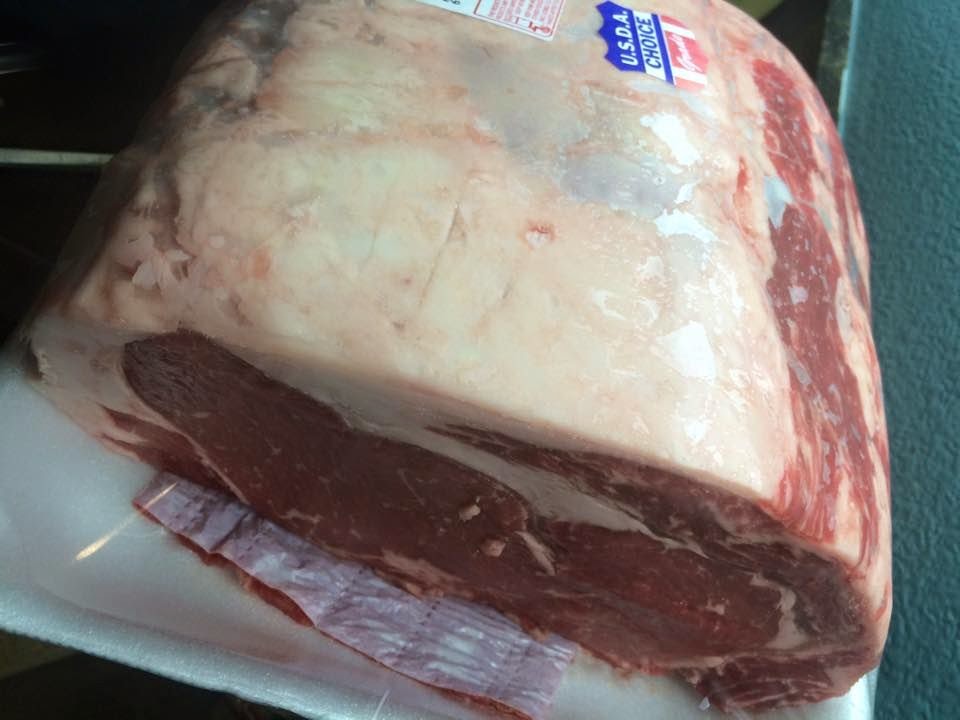 On a 7-lb boneless beef ribeye roast, we're talking about a $50 difference between Prime vs. Choice. I inspected several meats and I decided that it just wasn't worth the extra money for Prime. I did some side-by-side direct comparisons, and there is a subtle difference in the marbling. I chose the best looking Choice rib roast with the most amount of fat. Choice is still an excellent cut of meat for prime rib at a reasonable budget. It's technically not quite Prime, prime rib -- but pretty darn close. 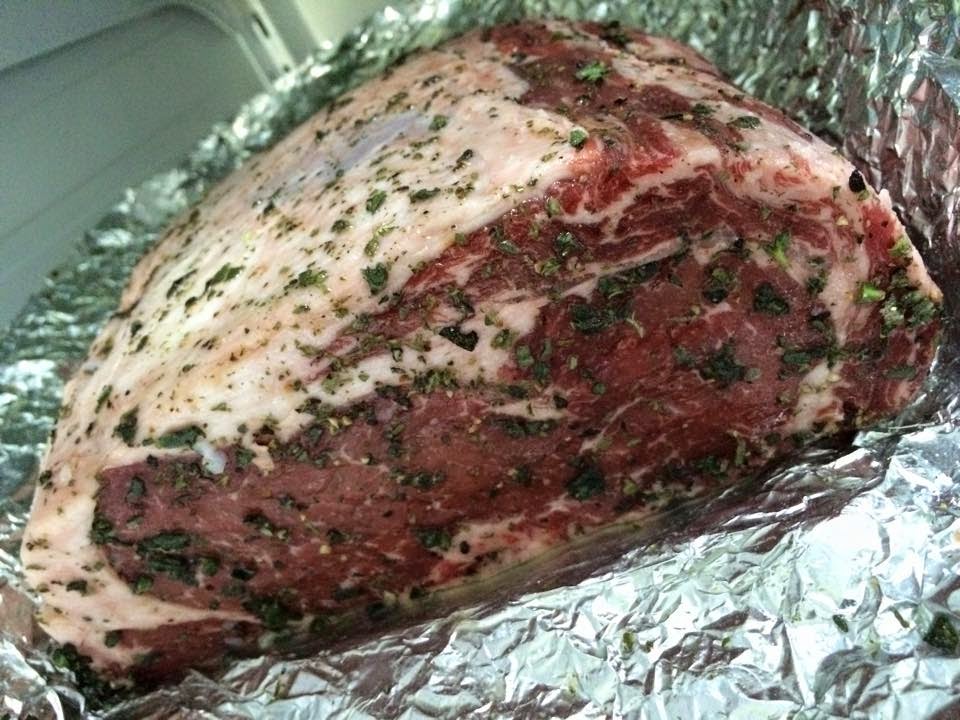 I decided to do a semi-herb crust on the prime rib. I say "semi" because it's not quite the thick and heavy paste that you see in many other recipes. After an olive oil rubdown, I covered the meat with a generous portion of Kosher salt, cracked black pepper, minced garlic, garlic powder, and chopped sage (or whatever herb, like rosemary and/or thyme). I left the prime rib in the fridge for a couple days, uncovered, giving it a little bit of a dry-brine and dry-aging effect. The salt will pull in some of the moisture from the meat and hopefully intensify the beef flavor. 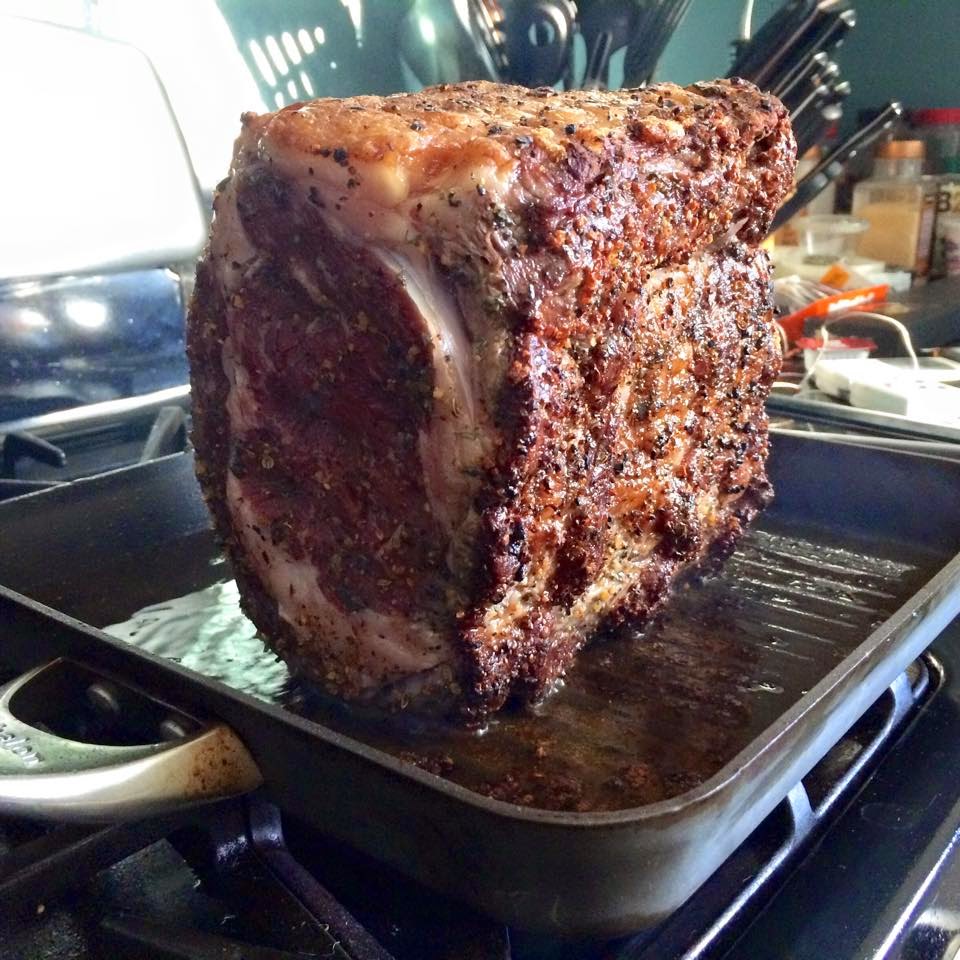 The next morning, I gave the prime rib a nice sear on all sides -- a good 2-3 minutes on every side. I was going to use my trusty cast iron skillet, but the prime rib didn't fit. Nonetheless, a standard indoor grill pan did the job. The smell was just intoxicating, and filled my entire house. The sizzling sound was over the top. I was practically drooling at this point. The pre-sear helps the rib roast develop a protective crust. If you sear the meat after the smoking process, there will be an ugly-looking brown colored ring, as I experienced in my smoked tri-tip. 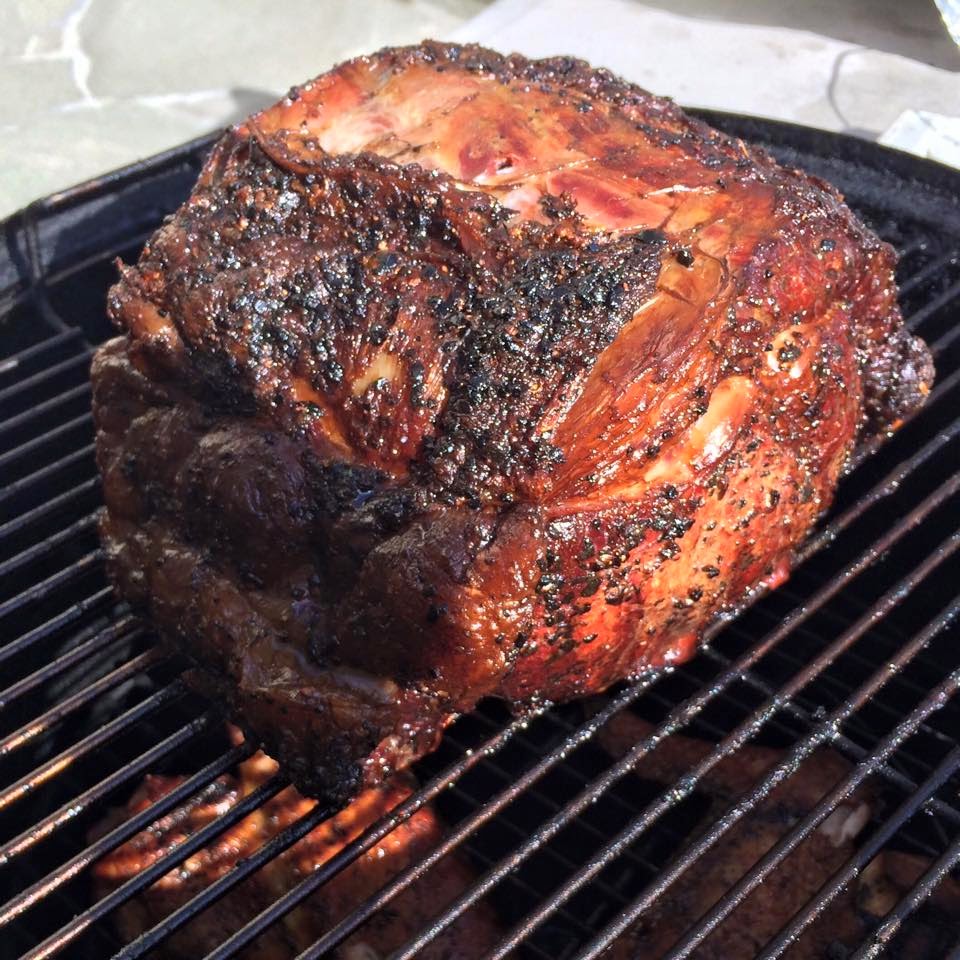 After searing, it was time to fire up the smoker. I decided to add a mix of hickory and pecan wood chunks -- but not too much, since I didn't want the meat to be overpowered by smoke. I kept the smoker at a consistent 250 degrees F. With the help of an internal probe thermometer, the prime rib was done in about 3 hours, reaching an internal temperature of 130 degrees F -- perfect for medium rare. If you want even more rare, then 120-125 will do. If you want well done, just stop reading right now. Just stop.

I wrapped the prime rib in foil and let it rest for about 30 minutes. The temperature will also slightly rise up to 5 degrees at this point. Do not, under any circumstances, cut, slice, or poke the prime rib during this resting period. If you do, all of those precious meat juices will come pouring out. 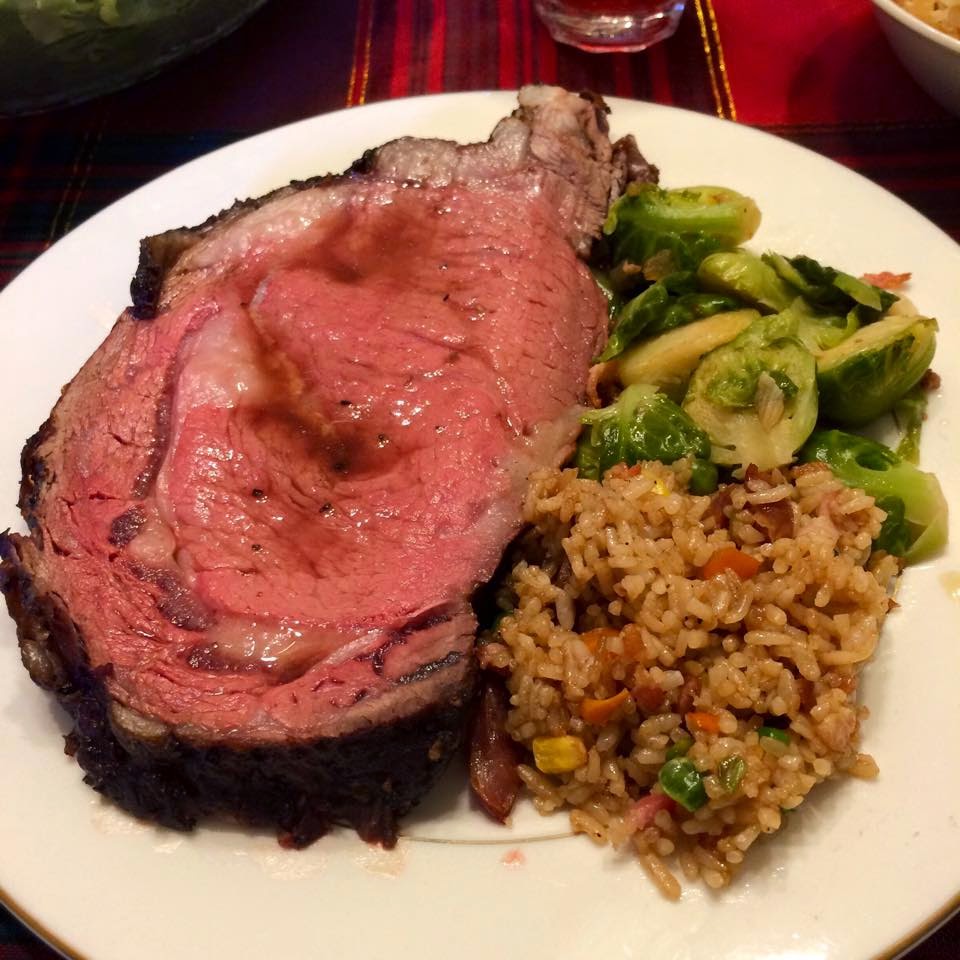 When it was finally time to slice up the prime rib, it was like slicing through butter with a hot knife. The prime rib was a perfect medium rare and extremely tender. I took the drippings and added some broth to create the au jus. What really differentiated this homemade prime rib from the rest was the smoke flavor. It was just subtle enough and complimented the real star of the show -- the beef.

So if you ever having second thoughts about cooking or smoking prime rib, don't worry. The most important thing you have to do is watch the temperature and make sure you do not overcook. That's it. People will think you slaved all day cooking the prime rib. Slice up the meat and serve the slices to your guests like a boss. Just sit back, relax, and enjoy.

The BBQ restaurant business is no joke. With the rising costs of beef and meat products, those already slim margins are shrinking down even further. Aside from raising prices, BBQ restaurants are forced to make money in other ways by adding a myriad of appetizers and side dishes to their menu. Alcohol will always be the gold standard as the top money maker, but for many BBQ restaurants and proprietors it's all about selling their line of BBQ sauces. 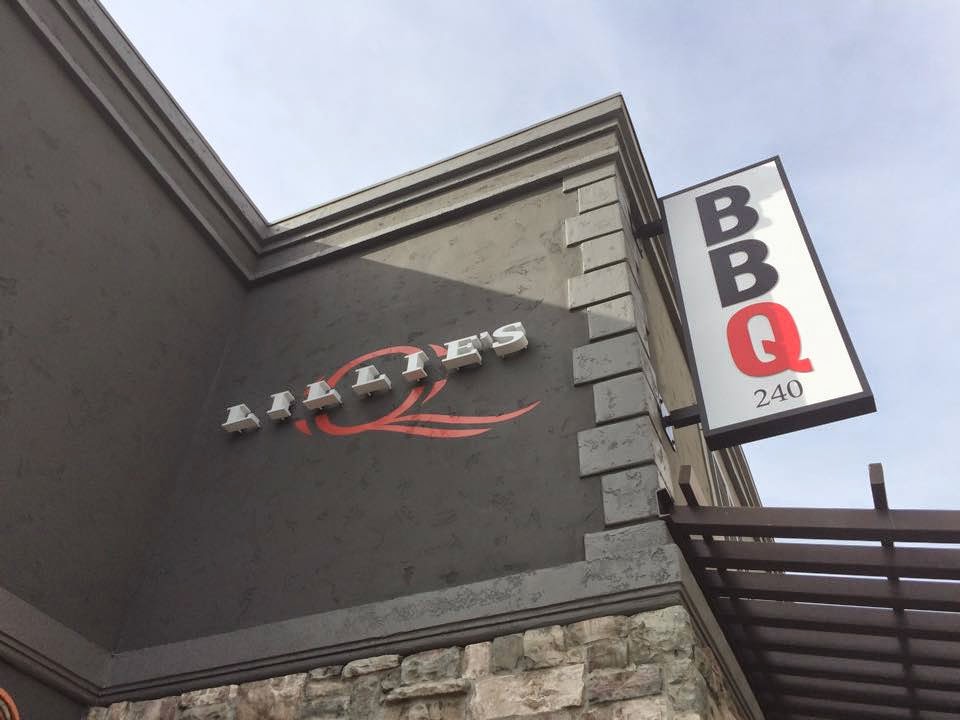 Lillie's Q has a half dozen of their BBQ sauces perfectly lined up at every table. There are sauces that are vinegar based, tomato based, or even mayo based. Smoky, spicy, thick sauce, thin sauce, sweet, or tangy. There are even limited edition BBQ sauces that quickly sell out -- playing the old Jedi-mind marketing trick. Good BBQ doesn't require sauce, but good BBQ sauce does require an occasional taste test -- at least in my book. 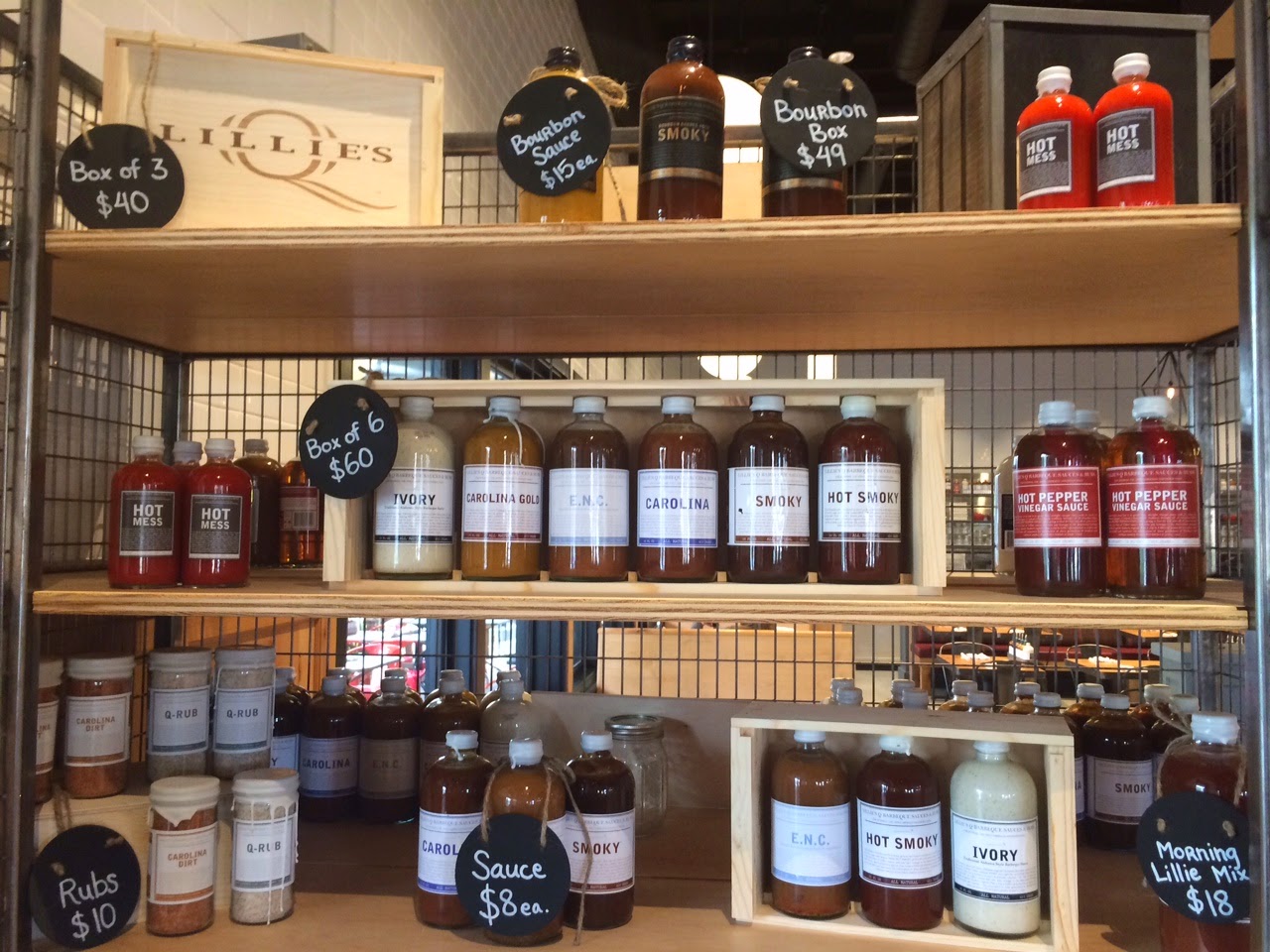 Chef and co-owner Charlie McKenna is one of many trained chefs with a passion for BBQ. It's a growing trend -- "upscale" BBQ restaurants with a regional influence are sprouting nationwide in major cities. Joe Manzella is banking on it. The TAPS Fish House & Brewery owner/restaurateur quickly partnered up with Lillie's after a visit to their flagship restaurant in Chicago.

With Memphis in May competition experience, there's no doubt that Chef Charlie McKenna knows his BBQ, with a southern twist. Whether that translates into a long-term, profitable BBQ restaurant in Southern California remains to be seen. Los Angeles has its fair share of good BBQ joints and even pop-ups, but the dearth of quality 'Q in Orange County is troublesome. Will Lillie's Q break the mold? Full review.

Not to get mushy or anything, but I want to dedicate this post to my blog readers. When I started this blog almost four years ago, I never thought I would get the opportunity to meet (both online and in-person) so many passionate people about BBQ. I'm definitely blessed.

As a BBQ blogger, I get to review some great BBQ and food related products out there, and every now and then I'm fortunate enough to win a social media contest. Just recently, the folks at iDevices held a contest on their Instagram page for Thanksgiving, telling people to share their best turkey pictures. I was the lucky winner of an iDevices Kitchen Thermometer mini. 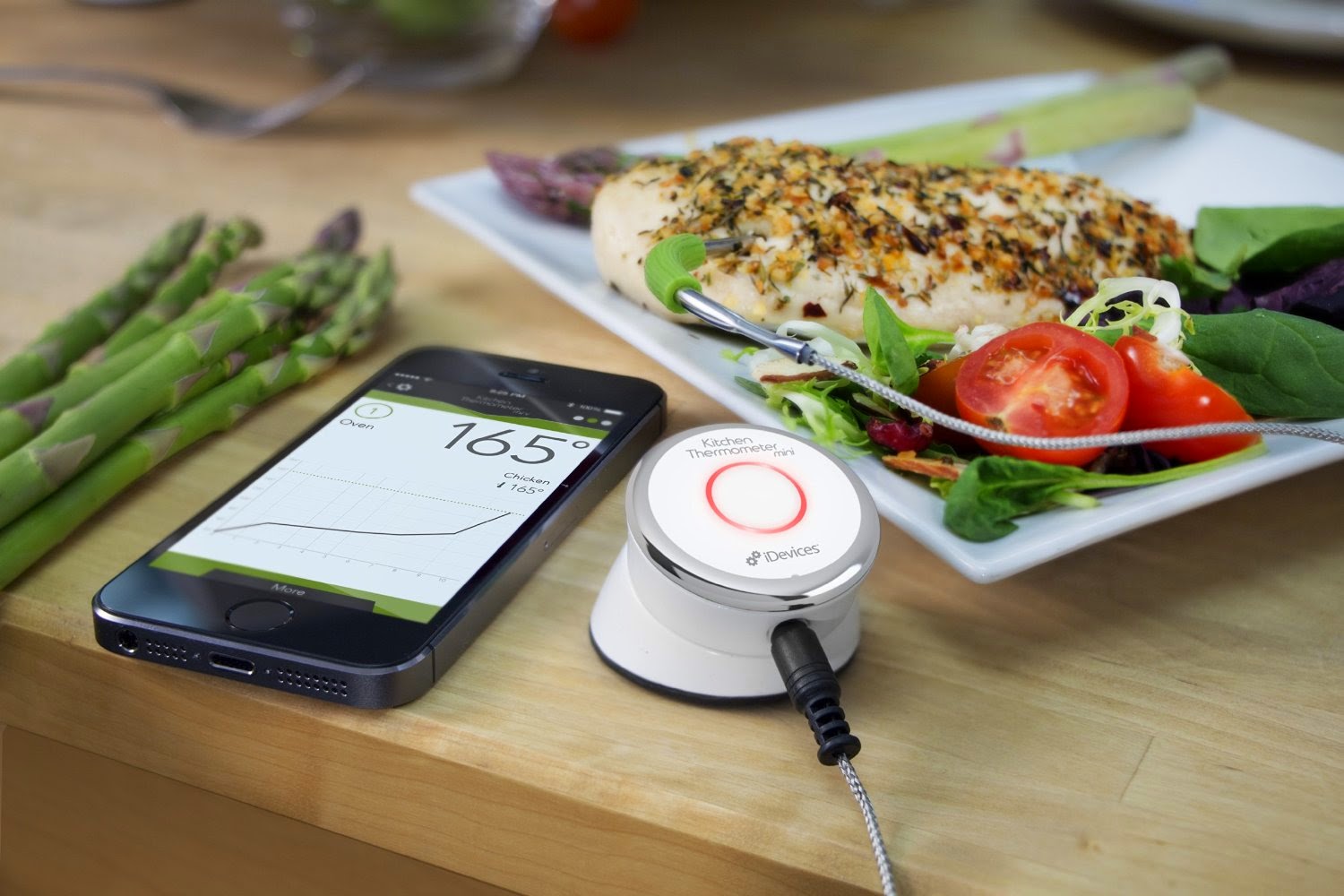 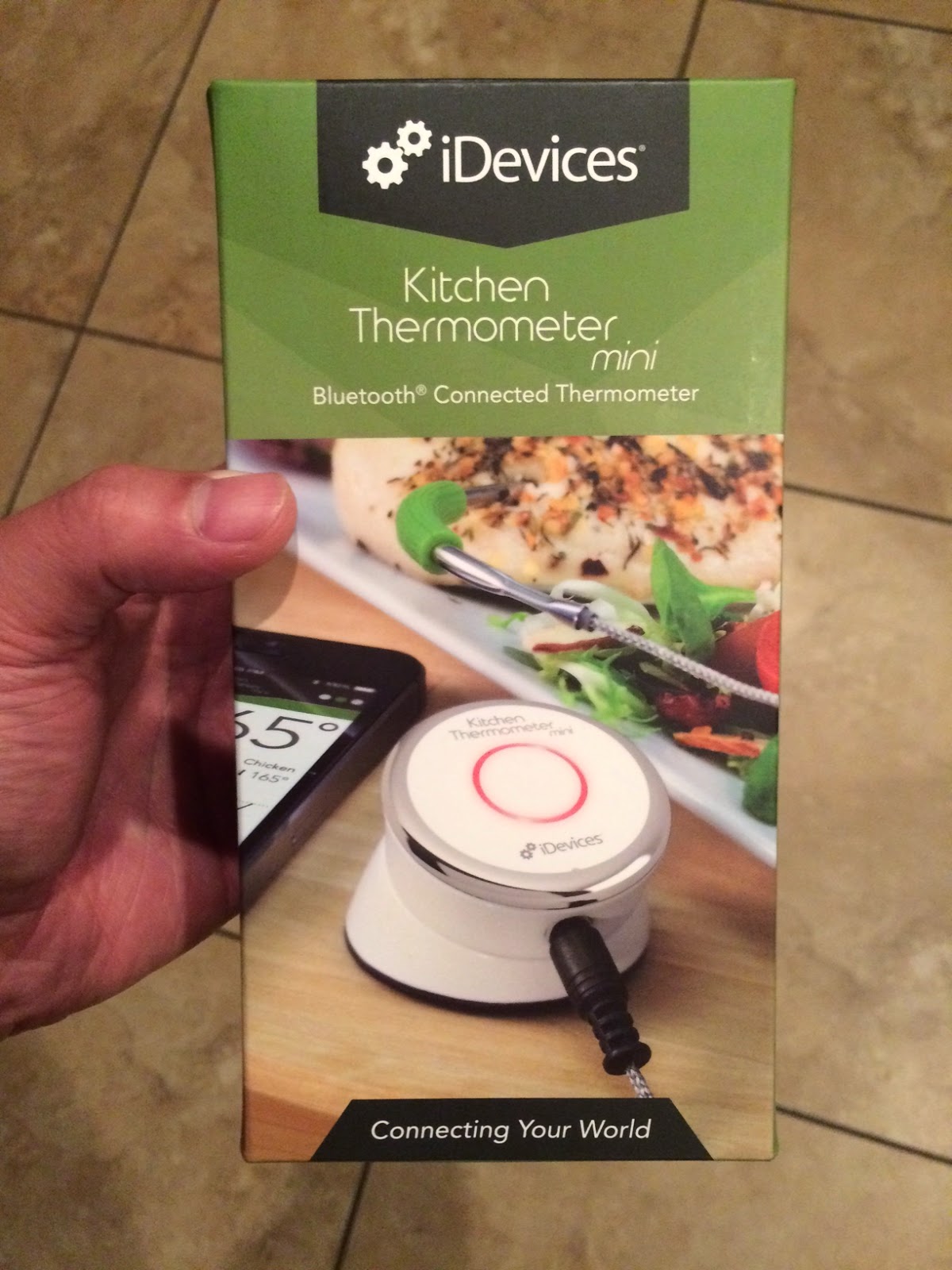 Since I don't need this prize (I already have an iGrill mini), I'd like to give this away to a lucky blog reader. Just enter using the contest entry form below. The contest ends December 15th, 2014. Good luck, and happy holidays!

UPDATED, 12/15/14: The winner was randomly chosen. Thanks to everyone who entered the raffle!

a Rafflecopter giveaway
posted by Dru at 7:42 PM

The Evolution of the World Food Championships

Three years ago, Mike McCloud didn't know what to expect when he launched the World Food Championships (WFC) in Las Vegas. It was the inaugural year and even the President & CEO/Co-Founder had "no idea what he was doing" as he shared his candid thoughts during the Food/Fight/Write food blogging conference at The Plaza Hotel & Casino.


The Dirty Smoke has attended as media and judged the WFC each of the last three years in Las Vegas. While the competition has been an evolution, it was not without any mishaps. In 2012, Adam Richman from Travel Channel's Man vs. Food was hired as the high profile host (along with one overly serious bodyguard) to lend some credibility and give the competition some visibility, but it only seemed to take the attention away from the true stars of the show -- the competing chefs, the home cooks, and of course the food.


While the WFC set up their main demo and presentation stage directly in front of Bally's Hotel & Casino -- prime real estate with high foot traffic along The Strip -- most of the chefs and home cooks toiled in obscurity behind Bally's parking lot. There were many "VIP" events set up that required hundreds of dollars in admission fees -- only to see meager attendance numbers. This was just one of many failed attempts at trying to capitalize and recoup the high costs of hiring celebrity chefs that endorsed and judged the competition.


Learning from their mistakes, the 2013 competition was a vast improvement. The focus shifted to the chefs, the home cooks, and their journey towards earning a spot to compete at WFC. The best move was a change in venue -- instead of the glitz and glamour of The Strip, the WFC organizers opted to move to the burgeoning Downtown Vegas area on Fremont Street. Gone were high-profile celebrity chef endorsers, instead opting for Food Network B-listers Ben Vaughn and Jeffrey Saad.

At the centerpiece of the Downtown Vegas move was "Kitchen Coliseum," a fantastic way for diehard fans as well as casual observers to feel the beating pulse of the WFC. Taking a cue from Food Network's Iron Chef, it was a way for the competitors to cook on an even playing field. The most thrilling part of Kitchen Coliseum occurred when chefs sprinted to the judge's table in an effort to beat the clock. It was also a chance to showcase just what the WFC was all about -- passionate people cooking their hearts out not only for bragging rights, but also for some serious prize money.

Fast forward to 2014, and the WFC remained mostly unchanged with the same location. But the WFC upped the ante. The number of competing teams doubled in size. There were more sponsors, and total prize purse swelled to a staggering $300k. Each category winner squared off to compete in the Final Table, with the winner earning a cool $100k and the bragging rights to hold an oversized check in front of other competitors on the main stage.


San Diego based chef Richard Heredia, winner for both 2013 and 2014 bacon categories, took home the title of 2014 World Food Champion with his final dish -- bacon tamal with salsa verde. Over the course of two years, Heredia's total WFC winnings total a staggering $120k. Insert cliche here -- not a bad way to take home the bacon.


After 3 years, the WFC has established itself as the ultimate food competition in the country, with over 400+ competitors. The WFC will even expand to host the first-ever Canadian Food Championships in Edmonton in July 2015, as well as a move cross country to Kissimmee, Florida in November 2015 for the main event. Safe to say, Mike McCloud and the WFC organizers learned from their mistakes -- they now have the winning recipe to a successful World Food Championship, which is to focus on the food and the stories behind the food. 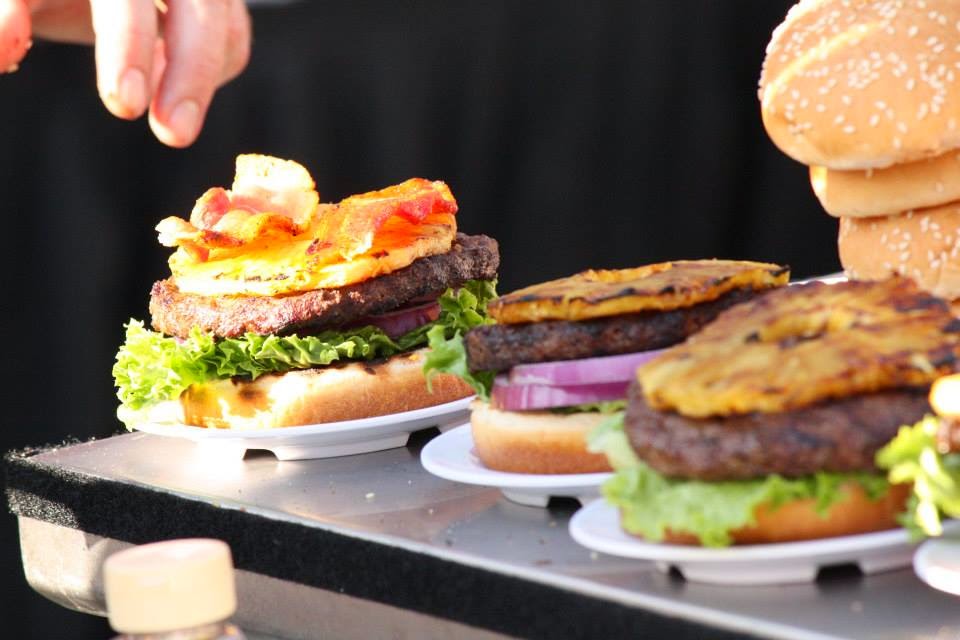 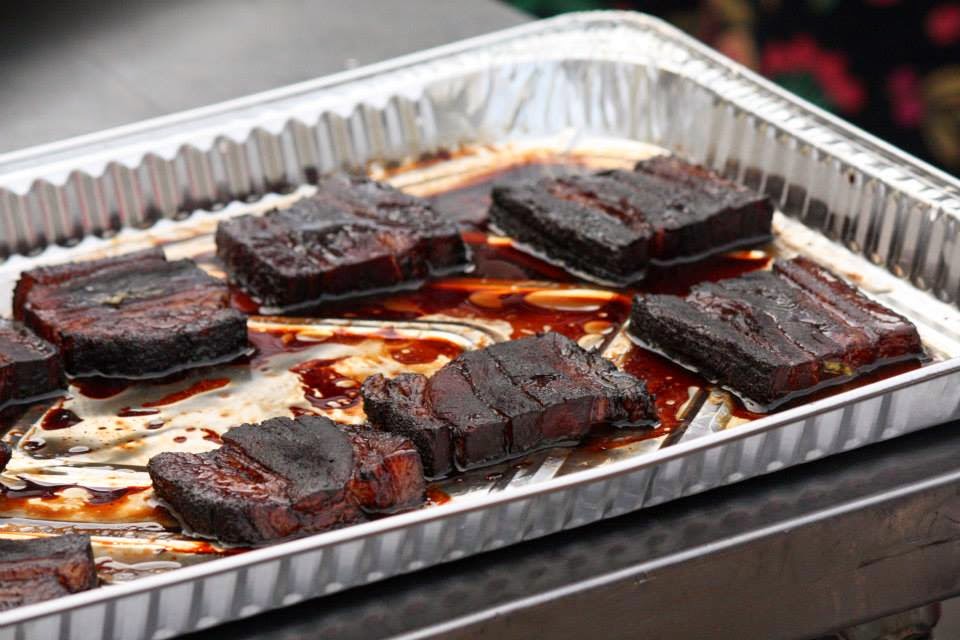