It's pretty evident that I love meat, but I'm a big fan of seafood too. For me, I would happily mix and match some juicy ribeye or NY strip steak along with some sweet and succulent dungeness crab or Maine lobster. Throw in some greens and potatoes, and I'll be grinning from ear to ear with my ultimate "surf and turf" dinner plate.

I love to dine out on special occasions, but those high-end steakhouses can really put a dent in the wallet. Lately, I've been heading over to my local Whole Foods to pick up some quality protein. Whole Foods has the reputation of being "Whole Paycheck," but at my local store they've really been ramping up the one-day or 3-day sales -- there are some good deals if you know when (and how) to shop. 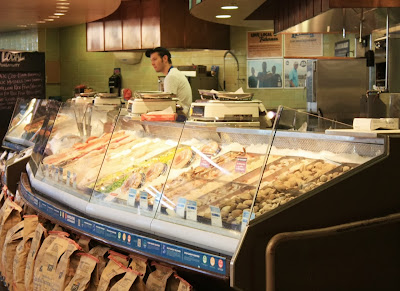 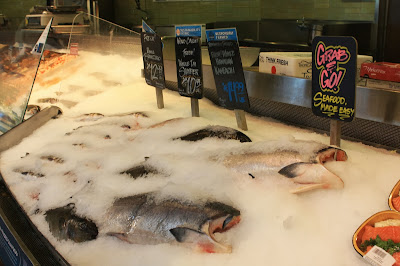 When you're grocery shopping and checking off your list, there's no doubt that protein will likely cost the most. Whole Foods tends to start their sales on a Friday, going through the weekend and ending on Sunday. Holiday and long weekends are the perfect time -- this past Labor Day weekend saw a good amount of sales, especially in the protein sections.

Whole Foods was nice enough to give me a quick behind-the-scenes tour of both the seafood and meat sections, and I even chatted with their expert fishmonger and butchers to gather some insight about how shoppers can maximize their surf and turf cookout -- especially when it comes to grilling and smoking. 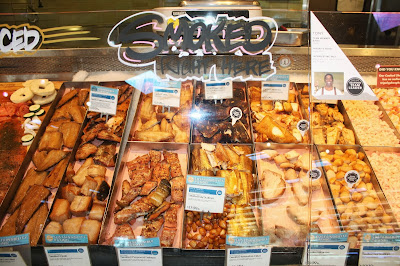 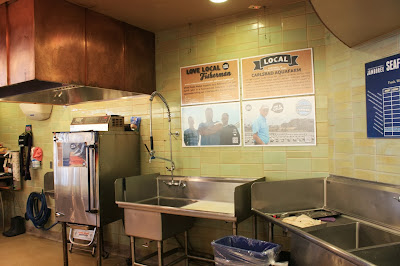 I started off at the seafood area, where I met Rusty, team leader who has been with Whole Foods for over 14 years. He's one of the selected few competing in the The Best Fishmonger/Butcher Face-Off in Portland, Oregon. In the competition, fishmongers and butchers from around the country compete in a series challenges in front of celebrity judges/chefs (one of them is Aaron Franklin from Franklin BBQ) and a live audience. Not only is it the speed of breaking down a fish, but it's the precision as well -- like how good the filet is presented with little or no waste. 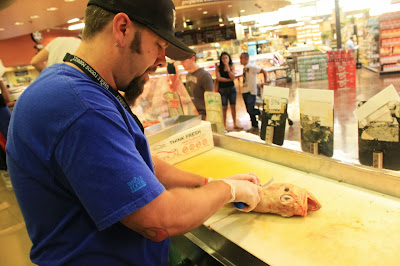 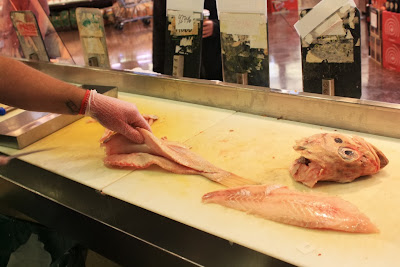 Rusty showed off some of his nifty knife skills, did a quick demo breaking down a fish, and talked about Whole Foods' fish selection and their process of smoking the seafood in-house. When I asked what the most popular smoked fish was, Rusty didn't hesitate and headed straight for the candied chilean sea bass to give me a sample. The fish was moist, tender, and flaky with just a hint of sweet and smoke. They'll use either mesquite, apple, or hickory wood chips -- depending on the type of fish. 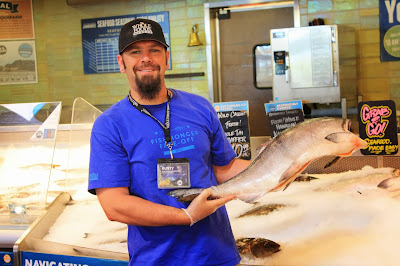 The most popular fish that people buy is either the farm-raised or wild salmon. Everyone has their own preference between either farm-raised for wild fish, and it when it comes to salmon there is a difference in taste. Farm raised salmon has a higher fat content, which some people prefer when grilling over high heat. On the other hand, wild salmon is more lean, is higher in omega-3's (good fat), and has more of that "ocean" taste. 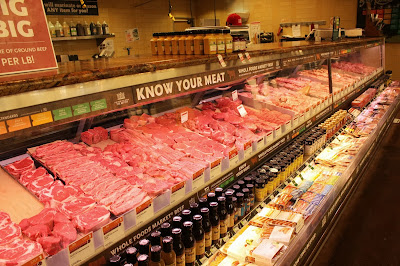 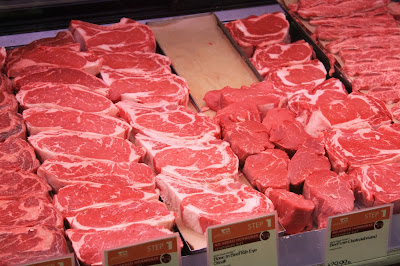 After the surf, it was time for the turf. I headed over to the meat section to visit Vince, butcher and team leader. When you approach the meat section, the sheer size and selection of all the different cuts of beef can be overwhelming at first. Many people know to head straight for a popular cut like ribeye to get their red-meat fix, but did you know that Whole Foods also sells dry-aged steak as well? You'll pay several dollars extra per pound, but if you're looking for that intensified-beefy and rich flavor, it might be worth the splurge. 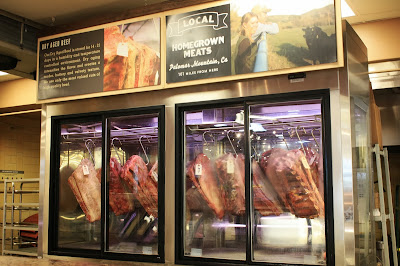 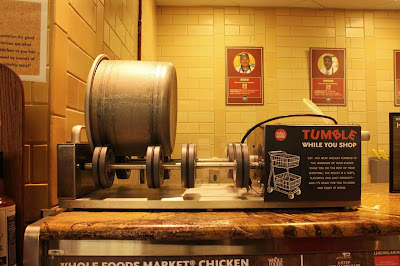 Another service that Whole Foods provides is a quick 30-minute marinade for the meat and flavor of your choice. If you don't have time to marinate something for hours or even overnight, you can give the butcher the meat to "tumble" while you shop. It's a cool contraption that simply speeds up the marinading process for the meat. 30 minutes later, the meat should be full of flavor and good to go. 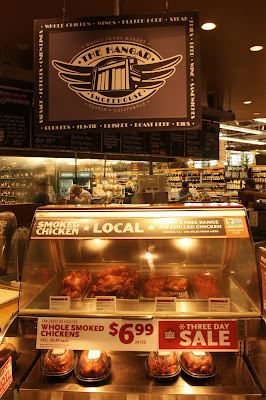 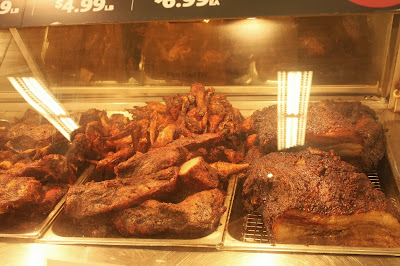 Of course, as a BBQ enthusiast, I looked forward to asking some questions about their in-house smokehouse. Vince gave me an up-close look at their Southern Pride -- a popular commercial smoker that a lot of restaurants use. They strictly use mesquite wood logs, which I found surprising because mesquite can be quite powerful if used too much. After sampling some of their smoked tri-tip and brisket, it was actually lacking on the smoke flavor. Go figure!

As you can tell by the picture above, they smoke their brisket fat cap side up, and they don't do any fat trimming or separating of the point and the flat. It's just one hunk of brisket like how they serve it at the meat station at a high-end Vegas buffet. So if you're buying their brisket by the pound, make sure to tell them to trim some of the fat off. 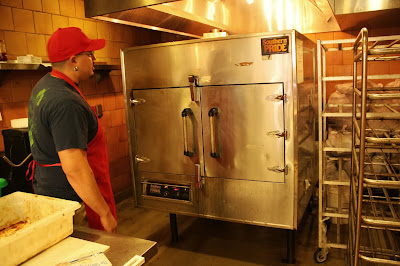 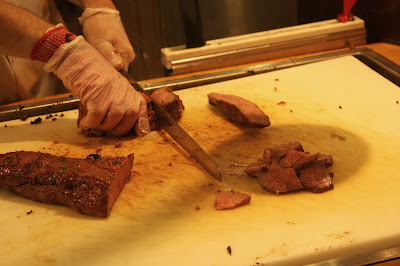 Vince mentioned that one of the best low-cost and alternative cuts for families looking to stretch their dollar is the top sirloin. It will never win a popularity contest going up against the ribeye, NY strip, or filet mignon, but top sirloin is a good choice that's just as delicious (for the non-picky meat eater) but much more affordable. 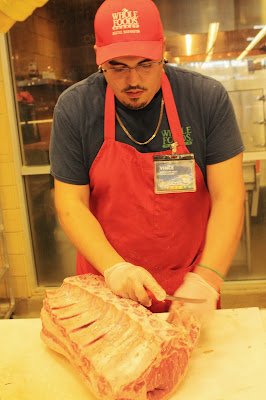 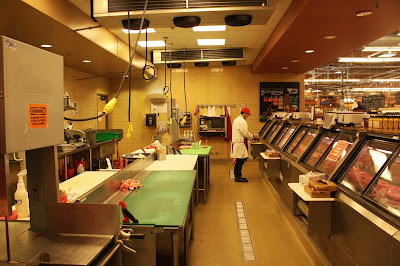 Do a Google search and you'll find plenty of tips and advice on how to grill the perfect steak. When I first started out, I would either undercook or overcook the steak. Now I can cook a perfect medium or medium-rare with my eyes practically closed (okay, okay... maybe not, I still need pay attention!). 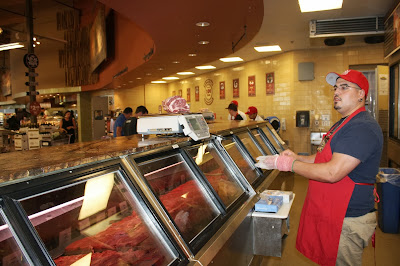 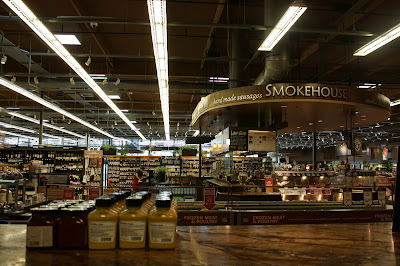 Thanks to Whole Foods for giving me a behind-the-scenes tour of their seafood and meat sections, and to Rusty and Vince for taking a few minutes of their time for a quick chat. It's always great to be able to talk to people who are equally passionate, if not more, about food -- especially when it comes to surf and turf!