The Ultimate BBQ & Bacon Guide to the OC Fair

Somehow, I just can't seem to pry myself away from the OC Fair. First it was deep fried Kool-Aid in '11, then it was the Big Beef Rib last year... so what will it be this year? What grease-covered, deep-fried concoction will they think of? What's the one media-hyped item that everyone just HAS to have at the fair?

It was essentially the same 'ol same 'ol at the OC Fair '13. Sure, there was somewhat of a slight buzz about the Krispy Kreme sloppy Joe sandwich introduced by Chicken Charlie's. But it just didn't sound very appetizing so I couldn't tell you how it tasted. I know what a Krispy Kreme tastes like by itself, and I know how a sloppy Joe tastes like... in the third grade. Ehhh, not for me. 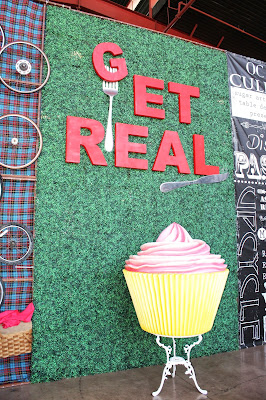 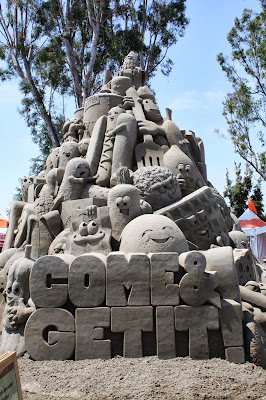 Truth be told, I was on the lookout for something really weird. After all, the theme was "Come and Get It!" When I won 5th place in the chili contest at the fair, I heard the announcer asking the audience if anyone had tried the bacon root beer. BACON root beer? Nobody had ever heard of it and the announcer didn't even know where to buy it. But I knew just the place.

Bacon A-Fair
If you're going to the fair and you want to eat something wrapped in bacon, then there's none other than Bacon A-Fair. The name says it all. You can't miss the huge, neon green sign with a picture of a nurse holding up a defibrillator. Bacon wrapped turkey legs, bacon dogs, deep fried bacon, bacon wrapped jalapeños, bacon wrapped portobello mushrooms, the list just goes on and on. And yes, this is where I tried the bacon root beer. 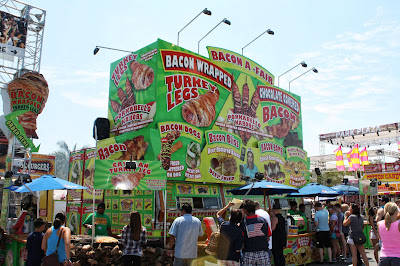 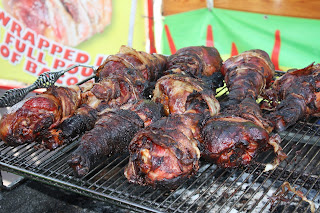 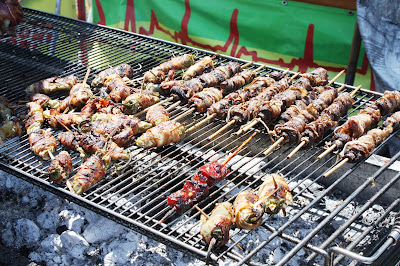 I think one of their more popular items is also their most overrated. The bacon wrapped jalapenos may look and SOUND good, but there's just not that much value (relatively speaking). Most of them are sloppily made, with rubbery bacon barely clinging onto a jalapeno stuffed with a little bit of cream cheese inside. Two small to medium sized pieces for around $7.50, I believe. That's highway robbery, even by overpriced fair standards. You're better off just making them at home.

Speaking of bacon -- it's better to have no bacon at all than to have rubbery bacon. That's just my own philosophy. Take the bacon wrapped "caveman" turkey legs, for instance. Who wants to spend most of their time giving their jaw a workout by chewing on some rubbery and fatty bacon before even getting to the turkey meat? Not me.

Which brings us to the item that I actually tried this year -- the bacon root beer. I watched a pimple-faced teenager pump the bacon syrup into a plastic cup, then fill it with root beer from the soda fountain. When the teenager looked at me and said "uh, you better stir that around before you drink it," it was at that point when I knew this wasn't going to be good. 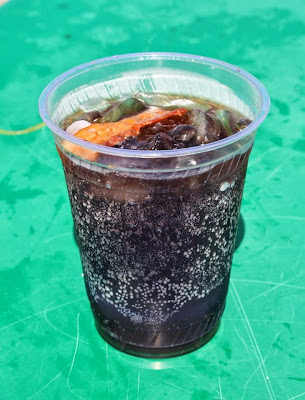 I took a precautionary sip -- okaaaay, not too bad. I like root beer and it only had a subtle hit of the bacon flavor. But after stirring it up and drinking some more, that bacon syrup became really heavy and downright nauseating. It coated the entire inside of my mouth and just completely overpowered my taste buds. I managed to drink about half before throwing it out. I'm thinking just a one squirt of that bacon syrup is enough. Maybe even half. 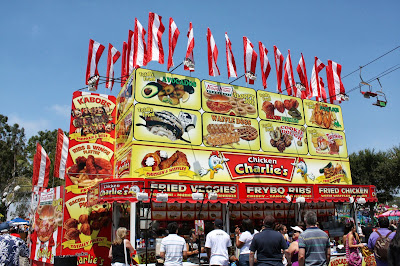 Chicken Charlie's
They are one of the more popular fair vendors, traveling all over the country and stopping by countless fairs along the way. I would say that Chicken Charlie is probably the most innovative when it comes to deep frying something new every year. They even had a reality show on the Travel Channel a few years ago, which gave a behind-the-scenes view of their multi-million dollar business.

This is where I tried the deep fried Kool-Aid a couple of years ago, and I've also tried the deep-fried Oreo as well. It's greasy and heavy on the batter, just like you would expect from fair food. Aside from good marketing and a personable owner, they also get prime location spots. One of their stands even features a giant, custom LED display which advertises their food while blasting music. They were playing "Gangnam Style" non-stop on my particular visit. I wonder if they had to give PSY a lifetime supply of deep-fried Twinkies.

Juicy's
Last but not least, there is Juicy's. They are a mainstay at just about every fair, and they focus on oversized classics. And when I say oversized, I really mean oversized. Their top selling and most popular items include the "Texas sized" turkey legs, "Giant Western" sausages, jumbo corn dogs, "Outlaw" burgers, and curly fries the size of a shoe box.

I believe they have the most locations set up at the OC Fair, and it just seems like there's a Juicy's at every corner. Their self-proclaimed World's Largest "Outlaw Grill," essentially a big rig truck with a very long grill attached to it, is located by Centennial Farm. Juicy's also dominates at Fair Square, a large area which provides covered bench seating for fair-goers, especially in the hot afternoon sun. Just listen for the pre-recorded marketing announcements blaring over the loudspeaker: "We've got lemonade, lemonade, and MORE LEMONADE!" 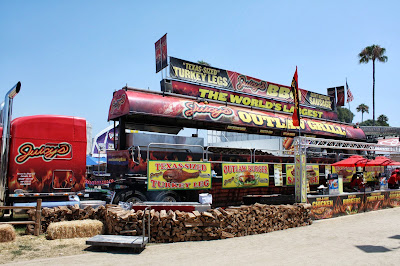 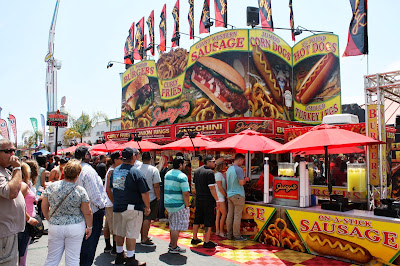 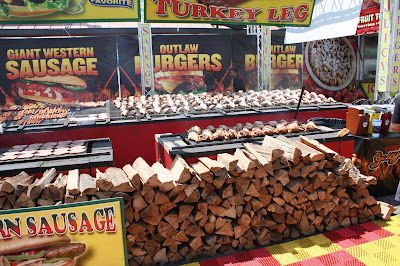 Something that fair-goers may or may not know, or perhaps don't even care, is how all this food is prepared. Most of these wide-open grills give the impression that they are cooking fresh food. As they say, people eat with their eyes first and nose second, so the display draws in hungry people. But one thing I noticed with Juicy's on this particular trip -- I saw the workers taking out frozen turkey legs and putting them on the back grill. These were hard-as-a-rock frozen legs covered with ice crystals.

When I asked one of the workers how long it would take for the turkey legs to defrost and be ready to serve, he gave me a shrug and muttered something before walking away. Either he didn't speak English or he just didn't want to talk about it. I know with the amount of food some of these vendors are cooking, using pre-frozen meat is inevitable. But there are vendors out there who cook fresh food. Just sayin'.