Finding good BBQ in Vegas is one thing, but finding an open BBQ restaurant in Vegas is another. Even before I even dived head first into the world of low and slow BBQ, I had heard of several BBQ restaurants in Sin City. The Salt Lick at the Red Rock Casino, Rub BBQ at the Rio, Lynard Skynard BBQ at Excalibur, just to name a few. Heck, there was even a BBQ place out in the middle of nowhere on the way to Vegas in Baker, CA. But that fizzled out rather quickly.

Running a BBQ restaurant is already a tough business with the challenges of consistent quality control and relatively low profit margin. I can just imagine how much the lease is inside a casino, especially on the Strip. There's only so much money that people are willing to pay for BBQ. So it's no shock that many BBQ restaurants have shut down in and around Las Vegas over the years. While the chains like Famous Dave's and Lucille's have the deep pockets to expand (Lucille's is opening in Red Rock), it's the mom-and-pop places that will likely struggle.

Rollin Smoke Barbeque just passed its 1-year mark -- no small feat for any restaurant, as 90% of restaurants fail in the first year. Just a few months ago, I had never heard of them, so it's a testament to the power of online reviews, word-of-mouth marketing, and social media. I recently had the chance to check them out. Located practically underneath the freeway near a couple of strip clubs in a tiny industrial area, to say the place is a hole-in-the-wall would be an understatement. It's a hole-in-a-wall within a hole-in-the-wall. 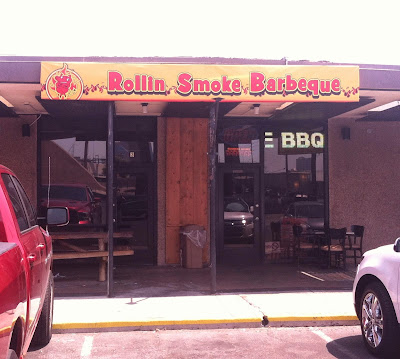 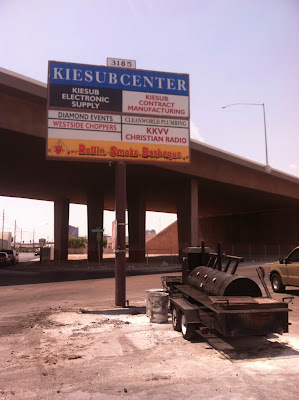 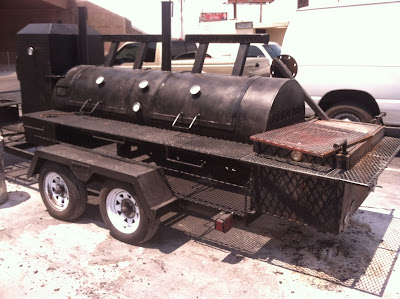 Once you spot the bright red and yellow signage and the big smoker in the parking lot, that's all you need to see. Inside, there are two areas. On the right side, you order your food at the counter and there are several sitting booths along the side. The other side is the main dining room with a colorful, painted mural depicting families enjoying their BBQ in a picturesque setting. The owners are originally from Arkansas, and you can definitely tell by looking at the wall. A razorback serving up some 'Q -- now there's something you don't see everyday! 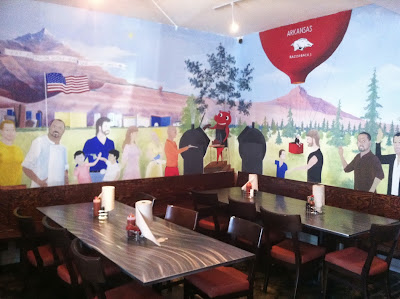 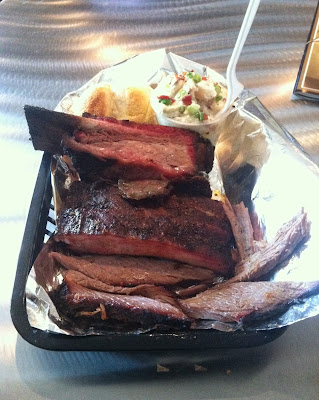 Right away, I could tell that is a real BBQ restaurant that smokes their meat, unlike those other horrific chain restaurants. At the front counter, Lee happily explained some of the choices on their menu and told me that they use hickory wood to smoke their meats. I went for the 2-item combo with the brisket and spare ribs, and chose a side of bacon potato salad. It also came with a roll and a drink. Heck, I couldn't resist adding a beef short rib too. They usually pour a little BBQ sauce on their meats, but I requested mine with no sauce. Total cost including tax was about $19, which was very reasonable.

When the food arrived, I was a bit disappointed in how the brisket was presented -- it looked like they were leftovers hastily chopped off along the grain. But it had some good flavor, was nicely seasoned, with just a touch of hickory smoke. Although it wasn't dry, a few douses of their housemade BBQ sauce really added a fantastic peppery profile to the meat. When I say peppery, I mean peppery! They use some very large, coarsely ground cracked black pepper in their sauce. I had to do a double-take when I saw these black particles floating around in the squeeze bottles and made sure it was really black pepper and not something funky. 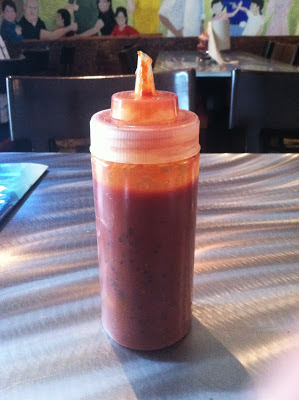 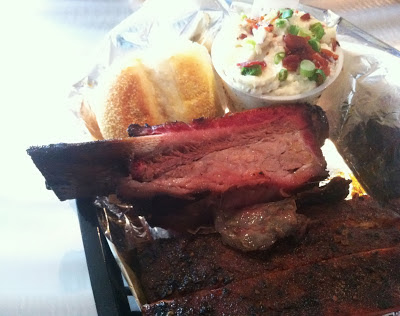 As for the spare ribs, there were a bit bland on its own. There was no crunch from the exterior bark, but it was tender with a nice, pink smoke ring. The ribs definitely needed a heavy slathering of the BBQ sauce for more flavor. My favorite item by far was the beef short rib. Although not a prehistoric, monster-sized rib by any means, there was enough meat clinging on the bone to satisfy. The beef was so tender and juicy, with just a kiss of hickory smoke. I could probably eat about a half dozen of them like beef lollipops.

The bacon bits in the potato salad added a salty, crunchy element and helped provide the carbs to the protein-heavy meal. Overall, I was satisfied with my meal. This is a no-frills, non-pretentious place to enjoy some solid BBQ. I would rather eat here than any of the BBQ chain restaurants, that's for sure. All of the employees were friendly and made me feel comfortable, like I was a guest eating at their home. This was my first time eating BBQ in Las Vegas, and it hopefully won't be the last. BBQ, strip clubs, and gambling? Shh, I think I died and gone to heaven.