Uh oh. Hopefully, the Diners Drive-Ins and Dives curse doesn't hit my favorite BBQ spot in Southern California (aside from Phil's BBQ in San Diego). This past Monday, the long-time Food Network show visited Bludso's BBQ in Compton, CA. The bleached, spikey-haired host did his usual horrible job of trying to be funny with owner Kevin Bludso. When Kevin was taking out the ribs from the smoker, he said "wanna try some of this?"

To which Fieri sarcastically replied, "No I thought I'd just sit here and watch you bring them out." Okaaay. Make no mistake, the show is all about the restaurants, the people behind them, and their food. It is the only reason I've been watching the show since the beginning and has given me lots of ideas for my own home cooking recipes. The host thinks he's the star of the show, but we all know the truth and how everyone feels.

Among the highlights of the show, Kevin shares his recipe (I'm sure he left out a few secret ingredients) for his spicy BBQ sauce and rub, that he smokes with red oak and pecan wood at 250 degrees F for his ribs, what the "Compton trim" is (vs. the St. Louis trim), and his mom's collard greens recipe.

A couple of years ago when I started my low and slow BBQ journey, the spot that changed it all for me was Bludso's. Southern California obviously isn't known for good BBQ and is over-run with chained restaurants advertising "fall-off-the-bone" BBQ. Of course, Bludso's is different. I drove to Compton, demolished most of the BBQ in minutes, and was so excited that I wrote the blog post as soon as I washed my hands from that spicy BBQ sauce. It was my first introduction to Texas-style BBQ and I was hooked.

They do have its quirks, however. They slice their brisket with the grain, but it's still reasonably tender because it's sliced real thin. Usually brisket is sliced against the grain to prevent chewiness and it's how most people like to do it. By default, they like to slather the meat with their BBQ sauce, so if you're someone like me, be sure to ask for their sauce on the side. Although Bludso's is known for their brisket, it was their smoky black bark on their spare ribs that had me drooling for more.

I haven't returned to Bludso's since, as I've enjoyed my own backyard BBQ over the last couple of years. Earlier in the year, Bludso's Bar & Que opened up in West Hollywood, CA at the corner of Melrose and La Brea. I have yet to visit, but it's more of an "upscale" and larger version of the original location with much higher prices ($20/lb for brisket?!), indoor seating, and a bar. I've got bookmarks of LA-based BBQ restaurants to check out, so I'll be sure to add them to my list. 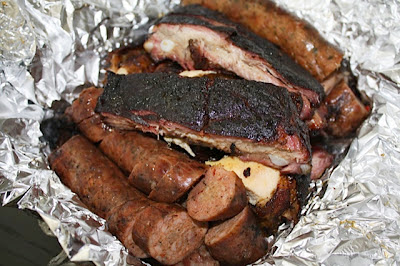 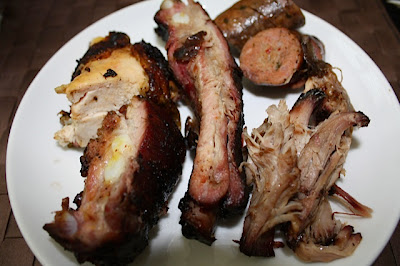 - Cook down for about 3 hours, let it sit overnight, then strain.