Whether it's backyard or competition BBQ, the rub can make either a huge or subtle difference in the overall flavor of the meat. In competition BBQ, most people will be very heavy-handed in applying the rub, because after many hours of low and slow smoking, there is honestly not that much distinct flavor from the rub that will come through. It also depends on the meat -- you can definitely taste more of the rub flavor on chicken versus something like a brisket.

If you're familiar with competition BBQ, then you should be no stranger to Harry Soo from Slap Yo' Daddy BBQ. He's won a plethora awards, but if there's one category that sets him apart from the competition -- it's his BBQ chicken. He consistently scores and places high in chicken because there is a distinct flavor profile in his rub that's a bit salty, tangy, and sweet. Combined with the natural juices from the chicken thigh, it really is mighty tasty. Naturally, Harry launched his own chicken rub to sell -- so that everyone can enjoy a taste of BBQ competition chicken flavor at home. 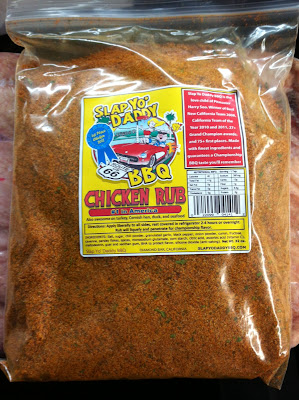 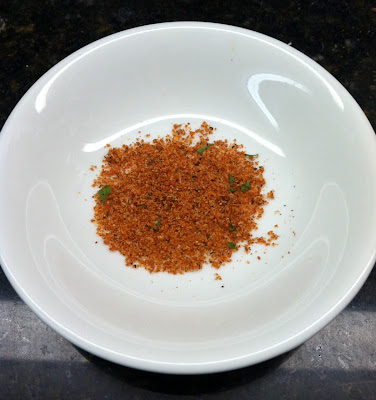 As I do with my other product reviews of rubs, I like to do a little taste test of the rub on its own and inspect the quality of the rub up close. As you can see from the picture above, the first thing you'll notice are the green parsley flakes mixed in the predominantly red-orange color of the rub. The first few ingredients are salt, sugar, chili powder, granulated garlic, black pepper, and onion powder.

This serves as a pretty good foundation for most rubs. The next spice is cumin, and for those who are familiar with the flavor of cumin, it can be very potent and overpowering if used too much. You can definitely taste and smell the cumin in this particular rub. This rub is not intended to be spicy, so instead it leans more on the sweeter, tart/tang side of things. This flavor profile would be a good compliment to chicken and turkey.

So how did this rub taste on meat? Well, instead of trying to replicate Harry's chicken, I decided to do something different. I wanted to see how versatile his chicken rub was, and decided to use it on my brisket. Click here to see how it turned out.