How to Enjoy a BBQ Festival Without Going Insane

This past weekend was a glorious day in Southern California to enjoy the outdoor sunshine. It was about a perfect 75-80 degrees. Of course that meant everyone else wanted to enjoy it as well. I recently attended and judged the Santa Anita 2nd Annual Winner's Circle BBQ Championships. The large, lush venue of Santa Anita Park is perfect for a large event. I've attended events like food truck gatherings and cultural festivals here and it's always a great location. While I could talk all about some of the BBQ that I judged (check out last year's post), I wanted to address a different topic: how to enjoy a BBQ festival.
﻿


Quick overview for the uninitiated -- most BBQ competitions also have a "People's Choice" (or PC) part of the competition. The general public pays for sample tickets to taste BBQ from different teams and they get to vote for their favorite. The teams who participate in PC get paid based on the number of tickets that they receive. This helps to offset the high costs of of the BBQ competition.

I've either attended or judged more than a dozen BBQ competitions/festivals over the past several years. In my book, a BBQ competition also turns into a BBQ festival once the organizers start charging for admission and selling sample tickets for People's Choice. I've met and spoken to a few promoters/organizers and needless to say, there is a LOT that goes into putting on these events. Bravo to them with continued success. 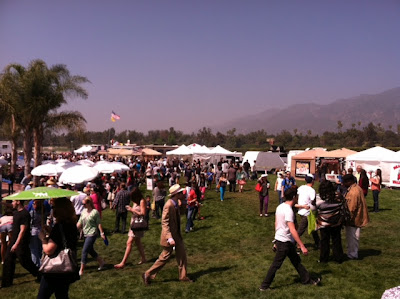 Unfortunately, in the business of event planning, things inevitably go wrong and there is only so much one can control. For BBQ festivals, here is the quick and dirty equation. BBQ + great weather + great location + "deal-of-the-day" = loooooong ass lines and angry people. It is a common theme, no matter how you slice it. Some people will have a great time, but others will not. So what can you do to enjoy a BBQ festival?

TIP #1: Avoid lines and arrive early. It may be obvious, but it can't be emphasized enough. If you want to enjoy a stress-free experience, plan ahead and go early. If the doors open at 11am, be there around that time or earlier. You can buy your sample tickets early and figure out which teams/vendors to try BBQ from. The closer it gets to noon, the longer and faster the lines swell up. Don't take any chances by showing up later -- tickets and food could run out. Plus who wants to wait in a long line to buy sample tickets, just to wait in another long line for a BBQ sample? Then repeat, again and again? You will be miserable and hungry.

TIP #2: If you purchased a "deal of the day," expect an even longer wait. For most of these deals, it's all about selling as many as possible. Sure, there's probably a cap -- but I'm sure most event promoters want to sell more than less. Usually both the admission and sample tickets are lumped together and you would save some money vs. buying everything separately. Most venues have a separate line specifically for people who purchased these deals. Based on my experience, these lines are usually longer than Disneyland. Once again, go early.

TIP #3: Don't expect to get a full meal from BBQ samples. When it comes to BBQ festivals, people always get excited and expect a smorgasbord of food at their fingertips. By the end of the day, they want their belly stuffed full of BBQ. Most of the time, it just doesn't work that way. Typically, the taste samples are about 2 ounces each, and it depends how generous it is being served. It also depends on how much food you need to get full, as everyone is different. As I mentioned before, by the time noon hits, it will be crowded with people trying to get their lunch. Lower your expectations and don't come in starving.