As a BBQ enthusiast and home cook, one of the things I love doing is concocting my own dry rub or BBQ sauce. There's just something cool about mixing several types of spices and herbs together and seeing the color and texture change. It's crazy how one or two of your "secret" ingredients can make such a difference in the overall flavor profile. It's why many people guard their own recipe so closely, and I'm sure that's how Colonel Sanders got started with KFC.

Of course, not everyone wants to or takes the time to make their own rub or sauce. There are countless BBQ products out in the market, and I'm always curious to try out something new -- especially if it's sitting in my cabinet begging for me to use them. Recently, I had a chance to use the product Char Crust on four pounds of smoked BBQ tri-tip. Char Crust is a pre-made, dry-rub seasoning blend that comes in various flavors. 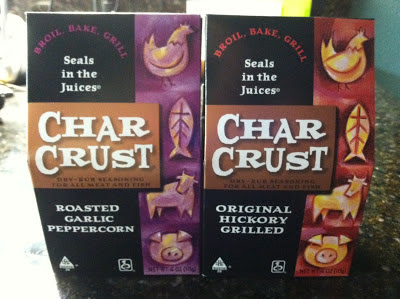 The first thing I noticed about Char Crust is the attractive, rustic-looking packaging. Inside is a white pouch containing the dry-rub, and I like how you can re-use the box to keep the rub from going stale. There is actually a shelf life on herbs, spices, and rubs. I think most people say give it about a year before tossing it out. So if you find something at the far back of your cabinet dated 1999, it's probably time to get rid of it!

While the "Only Char Crust seals in the juices" registered trademark and slogan is catchy and nice marketing, most people who are experienced and knowledgeable with cooking know that using a rub doesn't automatically equate to juicy meat. There are various factors and influences when it comes to how juicy a piece of meat or fish is. It generally has to do with the quality of the meat and how you cook it. Of course, using a rub (any rub, really) on the exterior -- especially with a good, hot sear -- doesn't necessarily hurt either.


I tried out two flavors -- roasted garlic peppercorn and original hickory grilled. As you can see in the picture above, there is a good amount of roasted garlic and onion flakes in the rub. If you're a fan of garlic, this would be a good one to use. I thought that it gave the tri-tip a nice, subtle flavor without overpowering the meat. I didn't really taste much of the peppercorn, honestly. If you want a more pronounced peppery flavor, I suggest using a pepper grinder for an added touch. I could see this rub work very well with NY steak strip, chicken, and a white fish like tilapia.


The Original hickory grilled rub is a bit more pronounced in flavor. Hickory wood flavor can be very overpowering if you use too much of it -- trust me, as I've made the mistake in my early days of smoking meats. Hickory compliments beef and red meat more than anything, so I would avoid using the hickory rub on chicken or fish. If you do, use sparingly. I thought that the hickory flavor complimented the tri-tip very well, especially after searing the outside to develop a crust. I think this hickory rub would be great on a large prime rib roast.

One thing I noticed looking at the hickory rub ingredients is that wheat is listed as the first ingredient, followed by salt, sugar, and soy sauce powder. Natural hickory smoke flavor is listed last. Wheat is also listed as an ingredient in the roasted garlic peppercorn rub, so if anyone is allergic to wheat, you're outta luck.

My overall impression of Char Crust is a positive one. One can never have too many types of rub in the spice rack, especially if you do a lot of BBQ'ing for your friends and family. If you're in a pinch with a last minute cooking request, it's great to be able to improvise and use some pre-made dry rub seasoning blends if you don't have to time to run to the market and make your own. Ultimately, however, I always recommend making your own signature rub.