The World Food Championships wrapped up in Las Vegas about a couple of months ago, but the memories are still fresh. Not only did I get to judge some of the best BBQ in the county, but I also got the chance to meet and chat with Adam Richman. Overall, I thought that the event was a success -- not quite the rousing success that the promoters had anticipated, but I think it's something that they can build upon for next year. 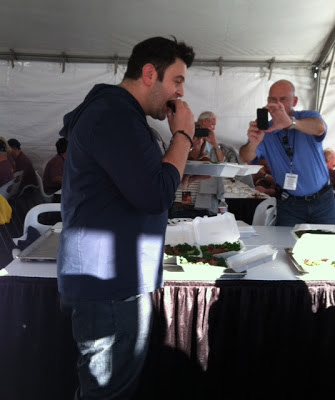 I was fortunate to be able to judge two days worth of BBQ, as well as the first round of the sandwich competition. The BBQ was some of the best I've had in my short tenure as KCBS certified judge. I gave some of the highest scores for both ribs and brisket, while the pulled pork deserved some moderate-to-high scores. Because of some promotional restrictions, there was no chicken in this competition. Instead, it was sauce. I'm just not a big fan of judging BBQ sauce.

During one of the judging days, Adam Richman dropped by to sample some of the pulled pork. Many of the judges simply stopped and started taking pictures, including myself. Hey, when one of the more popular food celebrities walks over, you have to take notice, right? 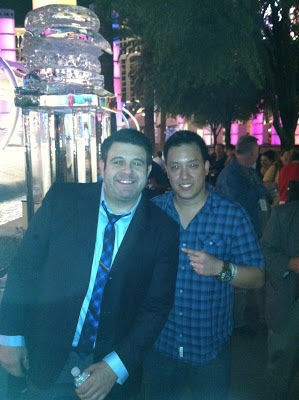 During one of the days, I was lucky enough to be able to win free admission to the VIP burger event, which took place right in front of Bally's. This event was heavily promoted, mostly because Adam was going to be there in person, but the high price of admission ($175, I believe) deterred many people from attending. The few burgers that I sampled were great in concept, but unfortunately were lukewarm to cold at night. Burgers are at their best hot and fresh off the grill.

Of course, the highlight of the evening was meeting Adam. My conversation with him was brief, so I just asked him what some of his favorite BBQ restaurants were -- a very open-ended question. He proceeded to rattle off about a dozen BBQ places off the top of his head, many of which I recognized from his show Man vs. Food on the Travel Channel. He mentioned the Salt Lick in Austin and Rendezvous in Memphis. He even talked about Phil's BBQ in San Diego, one of my favorite BBQ restaurants in Southern California. 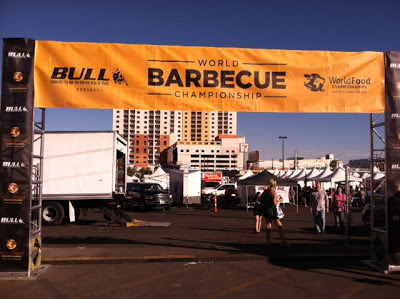 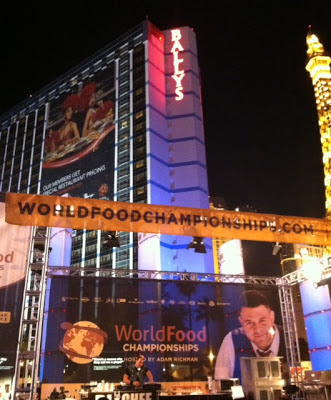 All in all, the World Food Championships was well organized with plenty of star power in the food industry. I saw Dr. BBQ, Chef Tim Love, Chef Eric Greenspan, and even the winningest man in BBQ himself -- Myron Mixon. If they can gather even more celebrities to help draw more people to the event, it would definitely raise the profile for this food competition a couple more notches. Who knows, they should even start judging and competing international food dishes, instead of just American food. 'Til next year!