Going to Vegas as a kid, the only thing I looked forward to was playing carnival games and eating buffet at the Circus Circus. I knew that eating at the buffet was my one and only opportunity to go full Fat Albert without my mother chastising me to eat more greens. I went all out, picking up all the fried and fatty, American fare like burgers, sandwiches and BBQ -- food that wouldn't normally be anywhere near my standard Chinese home-cooked meals of rice and vegetables.

So it's only fitting that I return to Sin City about a couple decades later to check out the World Food Championships (WFC) from Nov 1-4. Hosted by Adam Richman, it's tauted as the biggest and baddest food competition in the world. (Here's a great interview by LA Weekly). Vegas is a great destination to host this event, as the city has grown into a culinary powerhouse over the last several years. Buffets are fancier and bigger than ever, celebrity chefs are all over the place, and "foodies" have flocked to the city in search of hidden gems in Chinatown. 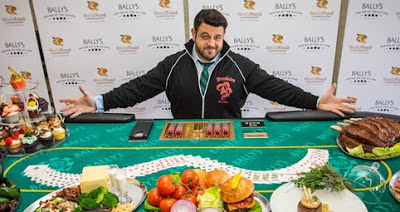 One thing's for sure, America will still and always love their comfort food. The WFC won't be judging fancy food here -- it's all about the burgers, sandwiches, chili, side dishes, and BBQ. With bragging rights and more than $300,000 at stake, who will elevate their dishes to the next level without compromising its true integrity? Hundreds of chefs and food lovers, including myself, will be judging. I'm slated to judge the first round of the sandwich competition, while judging all of the BBQ (pork, sauce, ribs, and brisket). One thing's for sure, I'm arriving on an empty stomach!