Last year at the OC Fair, I wrote about deep fried kool-aid. It was alright, but it just didn't provoke any excitement. I'm not really a dessert kind of guy. I'm all about the meat. Call me a BBQ snob -- but generally when it comes to BBQ at the fair, I just have to shake my head. It's all the usual dry, lifeless BBQ plates and sandwiches. But when I first read about the Big Beef Rib on OC Weekly and OC Register, I just knew I had to check it out for myself. 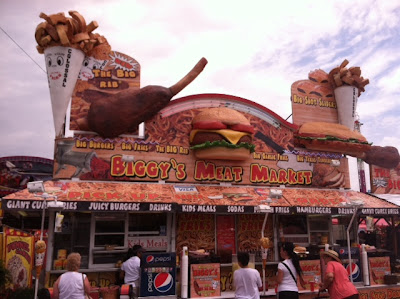 With a name like Biggy's Meat Market, the new guys in town for the OC Fair wanted to create something that would stand out other than the usual giant burgers and fries. Hence, the Beef Rib (or La Super Costilla, if you want to say it with some latin flare) was born, and from speaking with owner Dominic, he's one proud papa. 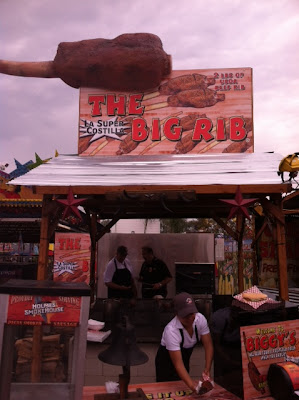 The Big Beef Rib isn't an actual, natural rib commonly found in restaurants (for my money, my favorite restaurant beef rib is from Phil's BBQ in SD). Dominic's beef rib is "engineered" to basically look like a giant meat lollipop. He wouldn't divulge any details, but he has assured me that there is no meat glue, chemicals, or anything artificial into the making of the Big Beef Rib. One thing's for sure -- there's something satisfying about waving an enormous meat club in the air while grunting like a caveman.

It's 2 lbs of USDA Prime meat wrapped around a 17-inch bone, forming a giant meatsicle (yeah, I just made that word up). According to Dominic, they are initially smoked for a couple of hours at a little higher temperature than the usual low and slow -- around 280 degrees F over oak wood. Then it's finished off over an open mesquite fire before being slathered with sauce.

At $16.95 a pop, these suckers aren't obviously cheap. But we're at the OC Fair, and just about everything is overpriced. When I first ordered the Big Beef Rib, I was given a choice of how I wanted the meat cooked -- best at either medium-rare or medium. Then I had my choice of sauce -- smoky, zesty garlic, or spicy. I chose medium and the smoky sauce. 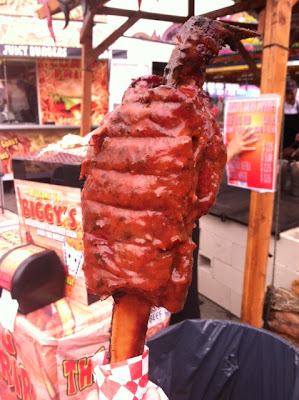 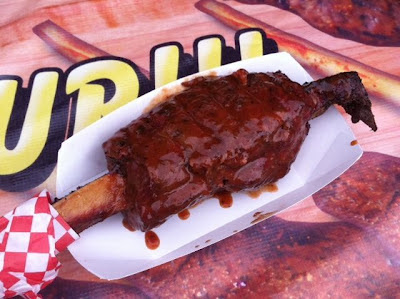 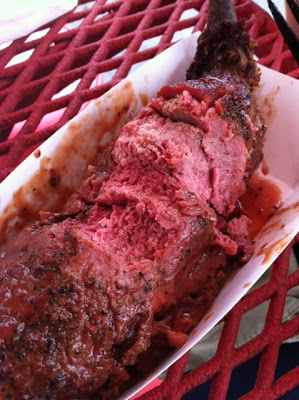 So how did it taste? I could taste a smidgen of smokiness, but I would've liked more. I was expecting to gnaw on some tough shoe leather, but the meat was actually tender -- especially the outer meat away from the bone. As far as the flavor, the meat itself could've used more of that "beefy" profile, and perhaps more seasoning. The slathering of the BBQ sauce definitely helped provide more flavor to the meat. I had to ask for more after eating about half of the rib.

As a BBQ guy, I obviously would've loved to have more smoky flavor in the meat and some more char on the exterior. It looked like the open mesquite fire was really low -- if the rib was finished off on a larger open flame to give it those awesome, blackened, grill char marks, that would've really elevated the rib. When it was all said and done, I had to put the leftover bone into the custom doggy bone bag for... who else? My dogs. They sure were happy! 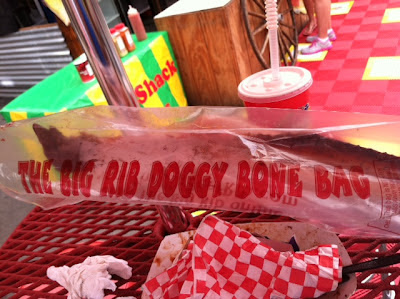 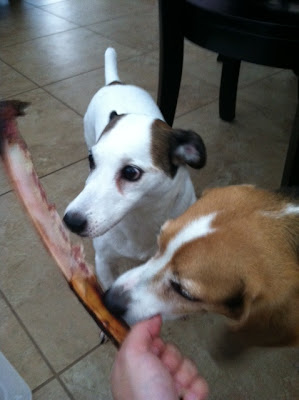