Las Vegas hosts plenty of conventions and trade shows, so it was a no-brainer that a BBQ competition be thrown into the mix. Promoted by Smoke on the Water, the ACM BBQ Throwdown was part of a weekend full of festivities leading up the ACM (Academy of Country Music) award show. It's only natural to see country music and BBQ teaming up together. Of course, the total prize of money of $50k helped draw over 100 teams from around the country.

I'm not much of a country music fan, but I just couldn't resist making the 3.5 hour drive to Vegas to judge some top-class BBQ. I was able to squeeze in as one of the last judges. If I couldn't go, well, I'm sure it would've broken my "achy breaky heart." 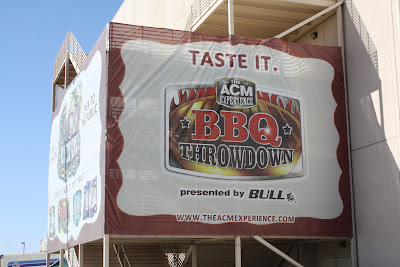 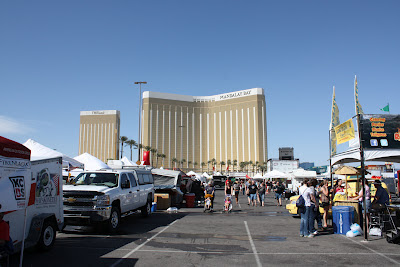 The parking lot of the Mandalay Bay was a nice location for the competition. There was plenty of wide open space, and the BBQ smoke filled the air (when it wasn't windy). Combine that with sunny 80+ degree weather and free admission, I was actually surprised that there wasn't a bigger crowd. 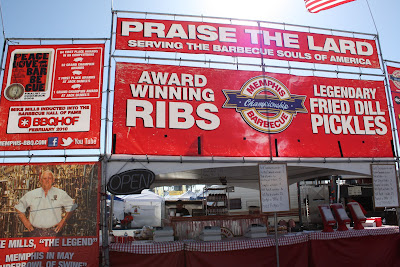 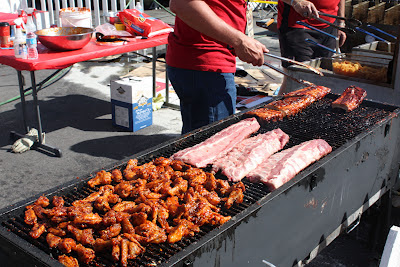 Other than eating and drinking, there was plenty of "country" related entertainment -- country line dancing, mechanical bull riding, and even lassoing. I was hoping Carrie Underwood would show up as a last minute surprise performance, but of course that didn't happen. 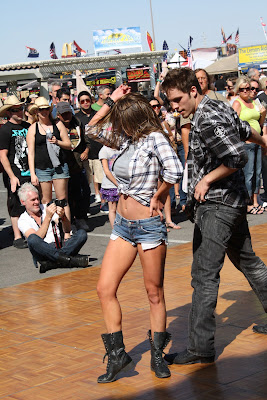 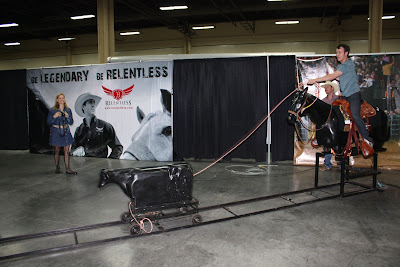 After getting over the initial excitement of judging my first contest in Santa Anita a few weeks ago, I had a better "feel" of what to expect the second time around. Not that I have years of experience or dozens of contests judged under my belt, but my BBQ judging taste buds are getting a good workout. Obviously, BBQ judging is subjective and everyone is different, but everyone is generally in the same ballpark when it comes to what is good or "bad" competition BBQ. The regions also matter too -- west coast judges tend to like spicier, bolder flavors, while the east coast favors the mellow and traditional flavors.

Chicken - In competition BBQ, chicken thighs not only have to be juicy and flavorful, but have "bite-through" skin as well. Smoking meat generally produces tough, leathery, and rubbery skin. Judges typically take one bite, so you don't want the skin to completely slide off. That skin has to be edible and taste good too. Every team has their own secret or tricks of the trade when it comes to treating chicken thigh skin.

Ribs - Most ribs that I've judged look fairly identical upon first glance, but that completely changes after the first bite. Ribs present the best opportunity for that "blank canvas," as most teams try to provide their own distinct and unique flavor -- whether it's the rub or the sauce. Most judges I've talked to seem to be like their ribs on the sweet side.

Pork - This category is the one that many teams have trouble with appearance, which is open to interpretation. Unlike the other categories, pulled pork meat can be presented in different ways within that styrofoam box -- in all shapes and sizes. When it comes to texture, I find that a lot of samples are mushy and overcooked, which is easy to do with pulled pork.

Brisket - Everyone agrees that brisket is the toughest category in terms of tenderness. But the taste and flavor of brisket varies so widely with each team. Some teams may opt to use a certain type of injection, which just stands out. Some judges may like it, and some don't -- it all depends. For me, I like brisket to taste natural and smoky, and not have any weird and distinct off taste. One judge said to me, "beef should taste like beef." Amen to that!