Whatever you may think of Bobby Flay (annoying, obnoxious, cocky, and a bit of a prick?), he's one of the few celebrity chefs known for his grilling and BBQ inspired dishes. So my eyebrows raised just a little when he tweeted about upcoming Santa Anita Winner's Circle BBQ Championship this Saturday, March 10th. Well, I'll say one thing -- it's a good thing they're not racing pigs around the track. 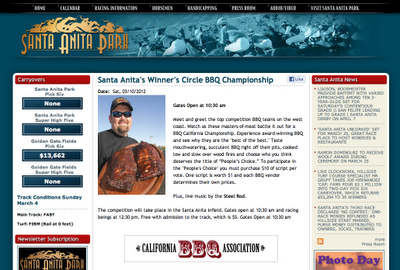 As the LA Weekly posted on their blog, this is one of only two sanctioned BBQ contests in the LA County this year. If you're a BBQ enthusiast living in LA, I say check it out. Take in the scene, take a big whiff of meat smoke, eat some samples, and vote for the "People's Choice" award. You can even say hello to one of the top BBQ teams in the country, Slap Yo Daddy BBQ. Harry Soo has been hovering around the top of the points leaderboard for the better part of the year.