Me: "So do you really serve authentic, low and slow BBQ here?"

Truck: "Yup. So what looks good on the menu for you?"

Me: "I'm a big fan of brisket. What kind of wood do you use to smoke your brisket?"

Truck: "Combination of hickory and apple, but for competitions we use some pecan. But pecan is more expensive."

That was the short conversation I had after walking up to the Ranch A Go Go BBQ food truck during lunch. I've heard of them before, and read some of the Yelp reviews -- but this was my first attempt at eating BBQ from a food truck. Naturally, I was a bit skeptical. I've been consistently smoking my own BBQ since the inception of this blog, so I know the amount of time required for legit low and slow BBQ. 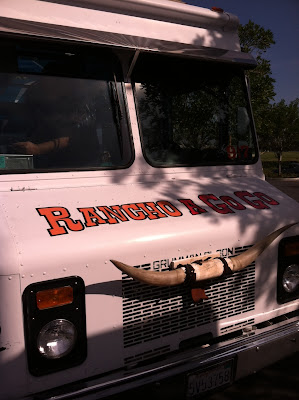 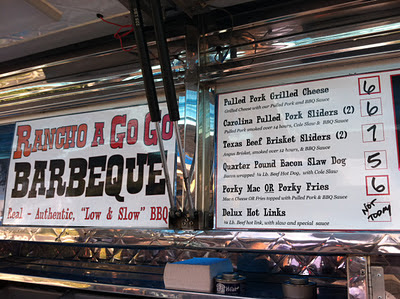 Trying to translate that love and care into a brick-and-mortar restaurant to serve to the masses -- we all know how difficult that can be. But to do it out of a mobile kitchen, aka food truck, is a different story altogether. After a few minutes of wait time, my order was ready.


Two of the "Texas Beef Brisket Sliders" were $7, and they sure don't skimp on the meat. But as the cliche goes -- it's not all about the quantity, but the quality. Ideally, you want to have both. With my first bite, I could definitely taste how tender the brisket was. They were cut into thick pieces, and I could tell that most of the fat in between the fibers of the meat had been rendered off. At this point, this is where most people who aren't BBQ enthusiasts (or even foodies), would tout this as the best BBQ they've ever had and happily throw up 5 stars on their Yelp review. 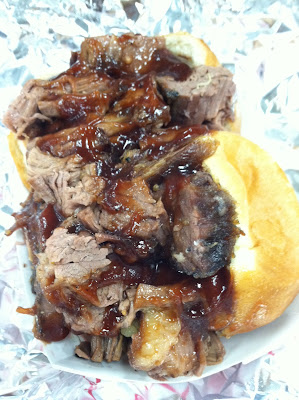 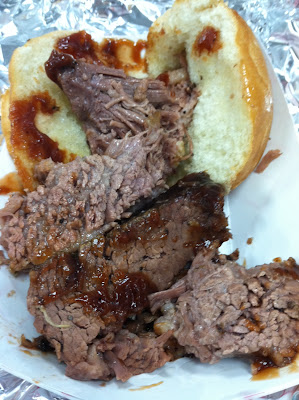 As I kept eating, it was evident that this brisket lacked any smoke flavor. I tried to find any microscopic indication of a smoke ring and it was just not there. If they really did smoke their meats, I couldn't find any evidence of it. While the meat was tender in most parts, a small portion of it was tough to chew. Overall, the brisket lacked flavor and seasoning. It desperately needed the BBQ sauce to provide the flavor. The brisket tasted like it was pressure cooked or braised, and needed to be sliced more thinly. As if it mattered, the roll was cold and needed to be toasted.

So was it horrible and inedible? Of course not. As a hungry, corporate office worker, it tied me over until dinner. The person who took my order was friendly and provided good service. Just like any other food truck out there, I applaud them. It's not easy. At the end of the day, it's a business and they need to make money to survive. If that means cutting corners, then so be it. For me, the real issue here is the sign on the side of their truck, claiming to have "Real, authentic, low and slow BBQ." I have to call them out on that one.