No, not that Minion (although those guys always crack me up in the movie).

If you're just starting out BBQ smoking, you might have heard of the term "Minion Method" once or twice. If you're already familiar with the term and have used the method, you know that it's far superior to what the manual tells you to do (if you're a Weber Smokey Mountain owner). If you're serious about smoking your own BBQ and you've read about it on this blog, you definitely know the Minion Method.

The Minion Method is basically a way of setting up the charcoal so that it burns longer, more steady, and more consistent. In general, you won't have to keep adding more fuel during the cooking process, so it's perfect for overnight cooking sessions. To top it all off, you can start cooking relatively quickly. If done correctly, it should last anywhere from 6-18 hours at around 225-275 degrees F--perfect for the low and slow meats like brisket and pulled pork. The Minion Method is not meant for smoking at temps of higher than 300 degrees F.

Basics of Setting Up the Minion Method:
Now of course, as in the case of BBQ Philosophy (as I like to call it on this blog), everyone has their own ways of doing things. I like to put a few chunks of wood on top of the charcoal, because I feel that the wood flavor penetrates the meat a lot more at the beginning stages vs. towards the end of the smoking process. Since charcoal is relatively cheap, I much rather put more charcoal at first vs. having to end up re-filling down the line.

As he explained in his class, Harry Soo from Slap Yo Daddy BBQ likes to make a "crater" with this Minion Method. He piles as much charcoal on the sides, almost playing a little game of balance, while leaving a hole in the middle. Then he fills the hole with fully-lit, ash-colored charcoal. That way, the charcoal slowly burns from the inside out. At the second picture below, the charcoal chamber is pretty much max'd out--so there's plenty of cooking/smoking time with that bad boy. 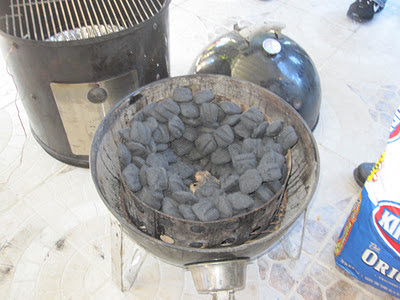 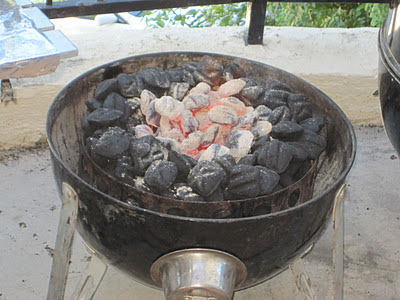 There are also those with distinct taste buds, who say they don't like the idea of smoking with unlit charcoal because it gives off a weird taste. They also say that it's unhealthy because unlit charcoal briquettes has that chemical taste that needs to be initially burned off (thus turning into the ashy, grey-color). Personally, I've smoked BBQ in all different methods and I really can't tell the difference in taste. That's part of the fun about BBQ -- there is no right or wrong, whatever works for you, just go with it.