Who knows how long the food truck craze will last, but it looks like it's here to stay for the time being. I can still remember the 'ol days ('09) when there were whisperings of some food truck named Kogi roaming around the streets of downtown LA. What were they selling? Korean-Mexican fusion? What does that even taste like? Little did we know, it would set off a food truck firestorm.

Hey, I admit it, I was curious just like everyone else. So as soon as I heard the Kogi truck (via Twitter, nobody back then even used it) would be anywhere near Orange County, I drove about 30 minutes just to wait in line and try their food. Call me a fan. Out of the dozens of food trucks I've tried over the years, Kogi is still my favorite food truck. Any good BBQ food trucks, you ask? Hah, do pigs fly? Oh wait, there is a food truck by that name...


In all fairness, it would be awfully tough to sell legit, low-n-slow, smoked BBQ from a food truck. Obviously you have tons of "fusion" BBQ, but not very many traditional American BBQ trucks. Most of the BBQ trucks I've seen simply sell pulled pork sandwiches or brisket sliders. I've tried a few, and nothing knocked my socks off.

Flash forward 2 years, and we've got food truck festivals and gatherings up the wazoo. Of course, there's even a TV show dedicated to food trucks. If it's one thing the food trucks learned quickly, it's that unless they have a well-established legion of fans like Kogi, they better huddle together like the cool kids in school. More trucks = more people = more business.

The OC Foodie Fest '11 is an awfully large food truck festival coming up this Saturday, August 27th. There's quite a loooong list of food trucks participating, and it's sure to be another packed house. I think the organizers learned a lot from the initial event last year, and they're ready to give it another go this year. The question is, how much food truck grub can you really fit in your belly?
posted by Dru at 8:51 PM

What are Spare Ribs vs. St Louis Style Ribs?

There's something ultra-carnivorous about eating ribs. You pick it up with your hands, tear into the meat, and let out a primal scream (or grunt) of approval. It's lip smacking, finger-licking, downright delicious to finish off an entire rack of ribs. By far, ribs is my favorite type of BBQ -- whether it's baby back ribs, spare ribs, or those dinosaur-sized beef ribs.


However, I've eaten some bad ribs during my time, and vow never to go through that experience ever again. If you've never had bad ribs before, consider yourself lucky. Bad ribs are either mushy in texture, non-smoked, dry and flavorless, or drenched with too much generic-tasting BBQ sauce. Bad ribs are simply boiled in water, or thrown into the oven. Words to live by:

What is the difference between baby back ribs vs. spare ribs?

It wasn't long ago, that I had no idea what the difference was between baby back and spare ribs. It all depends on the location where they come from on the pig. Baby back ribs are from the back loin. The bones are smaller in width and length, and meat is more lean and tender. So they're more popular, plus don't forget those annoying commercials.


Recently, I just felt like smoking some ribs, so I made a trip to Costco and bought $24 worth of spare ribs. At $2.99 per pound, I got 2 full racks of spare ribs, with each rack weighing a little over 4 pounds. It may seem like a lot of meat, but remember it will shrink down after hours of smoking. Spare ribs are usually trimmed St. Louis style before hitting the smoker.

What are St. Louis style ribs?

St. Louis style ribs are just spare ribs cut and trimmed into a rectangular shape, so that it resembles baby back ribs in appearance. The rib tips and skirt flaps are removed. You can have your butcher do it for you, or sometimes you can buy it St. Louis style already. But if not, it's easy to do it yourself. There are plenty of how-to videos online, but here's a good one. For the one I bought from Costco, I simply used a sharp knife and trimmed it myself. 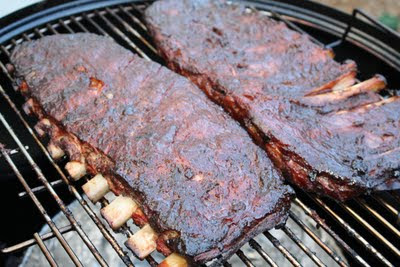 I made my own rub for the ribs. It's simple and straightforward with the following ingredients:

The end result was some pretty darn good ribs. I love how the spare ribs are so meaty, and it was tender, smoky, and juicy at the same time. The meat came clean off the bone. Though if I were a BBQ competition judge, I would want a better bark on the outside of the ribs. Practice makes perfect, right? But for now, these ribs were better than any chain restaurant could ever produce.

Also check out this great read: Smoked Ribs: The Ultimate Guide for Ribs

Smoking Salt With The WSM

Shopping at Trader Joe's is a bit like shopping at Costco, except you're not buying mass quantities of everything. There are constantly new items being stocked on the shelves, and I think that's a big reason why there are so many TJ die-hard fans and loyalists. Several weeks ago while shopping at TJ's, I came across "Naturally Smoked Sea Salt" with Umami flavor for $1.99. Needless to say, I was intrigued. I didn't buy it at the time, but it got me thinking about smoking my own salt at home. 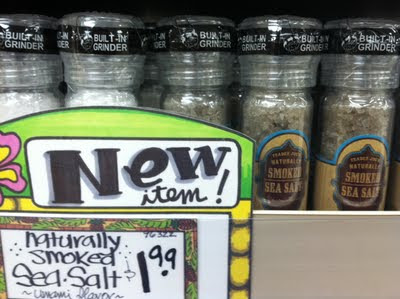 During my relatively short journey of BBQ smoking at home, about 80% of the time, there is plenty of hot charcoal leftover in the WSM -- up to an hour left. I always look around my fridge to see what else I can smoke. There's nothing really. The meat is all gone. If there's fish, I'm not going to smoke that. I don't want a fishy smell to taint my illustrious meaty coating I've built up within the WSM.

So what's left to smoke? Salt. Simply lay some sea salt (or kosher salt, just none of that crappy Morton iodized salt) on a flat aluminum pan and place it on the grill for about 1 hour. Depending on how much charcoal and wood is leftover in your WSM, you may need to put a little more -- just enough to impart flavor onto the salt. The temperature depends -- I usually smoke the salt around 250-300 degrees F. The longer you smoke the salt, the stronger the smoke flavor. 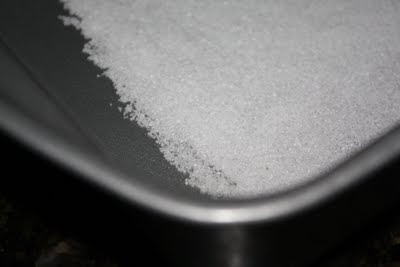 When done, just let the salt cool off before putting it a container. The result is pretty satisfying. I've used the smoked salt on my brisket, ribs, and chicken. It gives it that extra little hint of smoke in the background. Since I only have apple wood chips, that's what I've been using. But in the future, I'll definitely try out other types of wood like alderwood or hickery. The best part is you won't have to spend any additional money from any of those fancy smoked salt brands.
posted by Dru at 6:28 PM

Mustard Rub Update
A few weeks ago, I mentioned in a post that I had never slathered on mustard before applying the dry rub on the meat. I wanted to know if there was going to be any difference in taste or texture. Well, the simple and expected answer is no. Honestly, the outside of the brisket tasted exactly the same versus the time I did not use a mustard rub. Safe to say, after so many hours of smoking, any flavors of the mustard just "vaporized" away. Next time, I'm going to try a more potent rub. How about a Siracha hot sauce rub...

OC BBQ Bonanza
BBQ meat sweats is apparently sweeping the entire county of Orange. Well, one festival at a time, at least. Most likely taking a cue from the surprisingly successful (12k attendees, they say) OC BBQ Festival, there is now going to be a OC BBQ Bonanza event which will take place August 18-21 in Fountain Valley, CA.

The format is familiar -- you pay admission to get in, then you buy tickets to sample different BBQ from various cooking teams. Admission is $5 (includes $2 rib coupon), compared to $10 for admission alone at the OC BBQ Festival. For $100, you can stuff yourself silly with all-you-can-eat ribs and drinks. You definitely need to eat a lot to get your money's worth.

Volt Likes ALL BBQ
Michael Voltaggio of Top Chef fame will be doing a cooking demo today at 1:30 pm at the OC Fair. In this interview, he said that he tried a fried peanut butter sandwich somewhere in Studio City. Okay, that sounds pretty delicious. I'm always a fan when peanut butter is added to the equation. Someone needs to put that on the menu for next year's OC Fair... I'm talking to you, the makers of the fried kool-aid!

Several months ago, he and his brother Bryan did a BBQ tour for William Sonoma, visiting legendary BBQ restaurants from each of the 4 regions. Some day, I hope to check out each city and do the same:

When I tweeted Voltaggio and asked him which was his favorite BBQ spot, he took the high road:

"I can't answer that, favorite things about each spot!"
posted by Dru at 8:46 AM