Would You Really Smoke Spinach Salad?

With a blog named "Dirty Smoke," it got me thinking about the method of smoking foods. Not everyone has the time or equipment to properly smoke foods, so they use something fake like liquid smoke or some gadget like the smoking gun. Hey I'll admit it -- I'm guilty of using liquid smoke in my homemade chili (shh, I added a few drops in my chili and won the chili cook-off at my work). Of course, this was before I discovered the WSM. 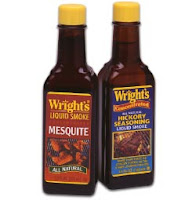 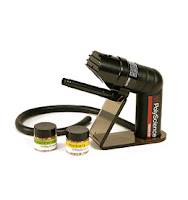 The smoking gun costs $100 and shoots smoke from a skinny tube onto the food of your choice. I couldn't help but chuckle when I first saw it -- there's even a video showing you how to smoke spinach salad and a Bloody Mary drink. I haven't used it myself, but judging by the reviews on William Sonoma's website, I'm a bit skeptical on how well it works. It's probably more of a gimmick than anything. Check out Bryan Voltaggio using it (around the 3:20 mark) in which he says he "loves using it."

One thing's for sure, you just can't beat the real thing -- smoking with charcoal and/or wood, low and slow, for hours and hours. After a while, your clothes and skin start smelling like smoke even after you take a shower. That's when you know you've been around smoke way too long.
posted by Dru at 3:48 PM