Spare Me Some Spare Ribs

Having the WSM is a little addicting. It had been more than a week since the last smoke-out and I was already getting the itch. So over the weekend while grocery shopping, I picked up a "family pack" of pork spare ribs at a local grocery store for a little under $7. It was perfect because I didn't want to buy a Godzilla-sized pack at Costco that would probably feed a small hungry village in some 3rd world country. 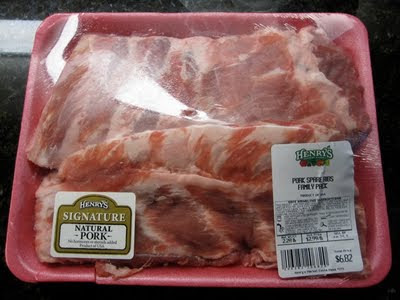 I slapped on some homemade rub and put it in the fridge overnight. The rub I've been using has been working pretty well. It's simple and gets the job done. I posted the recipe I used in the past, but this time around I added a pinch of cumin and a little brown sugar for some extra caramelization. 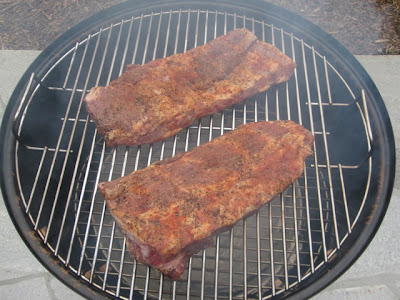 The next day, I threw it on the WSM and basted the ribs with apple juice on each side after a couple of hours. The grand total smoke time was 4.5 hours. This time around, I experimented by NOT adding any water into the water pan. As you know, the purpose of the water pan is to regulate the internal temperature and to keep it low and slow. With no water, you run the risk of higher temperature, so you have to adjust the vents and monitor very carefully. On the flip side, you can achieve better results on the bark -- the outside crust of the meat. See for yourself at the jump. 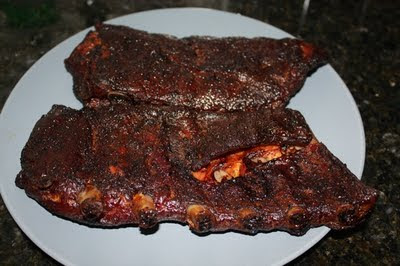 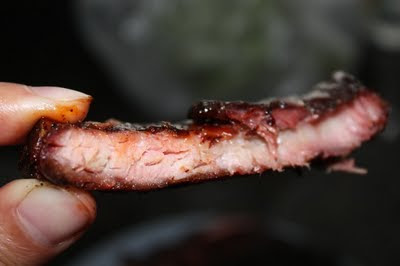 What a beauty. I slathered on some BBQ sauce and my wife and I tore into it like ravaging vultures. While eating, I tried to judge the ribs as if it were a competition. I liked the fact that the meat wasn't completely "fall-off-the-bone" tender but still had a good bite to it. It had a nice, pink color on the inside. I loved the outside bark.

If I had to nitpick, I would say that it was slightly on the overcooked side. It wasn't quite as juicy and tender as I had hoped. I can attribute this to the higher temperature (consistently around 250+, instead of the 225 range) from not having water in the pan. But overall, a good learning experience my first time smoking ribs.


Also check out this great read: Smoked Ribs: The Ultimate Guide for Ribs