Shhh... BBQ R2D2 (my nickname for the WSM) is sleeping. Smoking away, undisturbed, at a steady 225 degrees F. My first attempt at smoking brisket is now underway. But it's only been a couple of hours, and the anticipation is already killing me. How do all the seasoned BBQ veterans do it? Especially, when you're hungry, and the smell of smoked meat permeates through the air?

Since I'm using this blog to document/log my BBQ smoking experiences, I'll simply be posting my thoughts and pictures with every experience -- even the mess-ups. For my first time using the WSM, I'm using 6-lb brisket and 3 large bone-in half chicken breasts. Read more >> 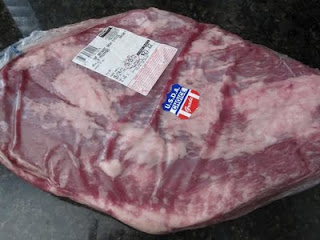 I bought the meats the day before, so I had time to trim the fat from the brisket, put the dry rub seasonings, and put it in the fridge overnight. One thing's for sure, trimming fat is a good test to see how sharp your knife is. Mine wasn't quite as sharp, so I had a tougher time cutting away some of the fat. So you can see it wasn't the cleanest butchering job.

The dry rub was nothing fancy, I just used whatever I had in my pantry:
I just sprinkled a little bit of each on the meat and gave it a good rub-down. It gave a nice, dark red coating and smelled pretty good already. I know Old Bay is more commonly used for seafood, but I thought, hey why not sprinkle a little for BBQ and see how it turns out.

The next day, I was ready to put the WSM to work. I fired up the chimney starter filled with briquets directly on the bottom grate of the charcoal bowl and waited about 15 minutes for the flames to start showing up on the top layer of the briquets with a little bit of white ash color. Then I dumped everything on the grate, and placed 5 small chunks of apple wood directly on the flaming charcoal.


From there, I quickly assembled the WSM by putting the middle section, then the water pan. I lagged just enough, that when I poured water into the water pan, it "flashed" and steamed water just a bit, but I managed to carefully pour all of the water without spilling it onto the charcoal below. I placed the first grate, slapped the brisket on it, then the second grate with the 3 chicken breasts. 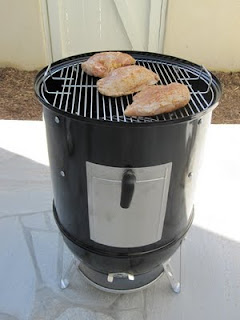 I put the lid on, and voila, I was done. The only thing left to do is monitor the temperature. It quickly rose to about 300 degrees F, but has now settled to around 225 degrees F. I couldn't help but fiddle around with the bottom vents. For now, I settled on this -- bottom 3 vents are halfway closed, and the top vent is open. For about a 6-lb brisket, I plan on smoking it for about 8-9 hours (following the 1.5 hour per pound guideline), so we'll see how it turns out. Obviously, I won't be smoking the chicken that long. Stay tuned for the after pictures and taste tasting. For now, it's just waiting...