When eating out BBQ, I try to avoid the chain restaurants out there, which can range from bad to downright mediocre. There was this Texas-based chain, which opened several years ago about a few minutes away from my house. I tried it once and never again. It was bland, no smoky flavor, and was in a bad location. The place didn't last long and shut down rather quickly.

Baby Blues BBQ in Venice is one of the better BBQ places I've tried in the LA area. It was on Triple D, and has its fair share of Yelp reviews, so of course many people will say it's "hyped up." I couldn't care less -- I just want good BBQ. I had the baby back ribs platter, along with a side of mac 'n cheese, sweet potatoes, and cornbread. What I liked about the ribs was that it had a nice crust and smoky bark, and was not TOO tender. Good ribs should still have a good toothsome quality, and not completely fall off the bone upon the first bite. I also liked how they provide several different types of BBQ sauces in squeeze bottles on the table. 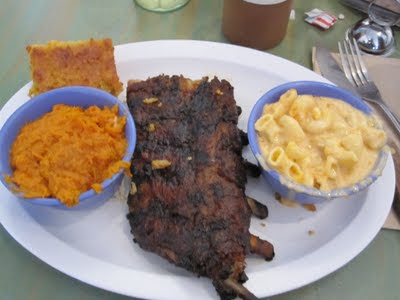 People are always trying to pigeon hole BBQ places... like oh what style BBQ is this? Texas, North Carolina, Kansas City, etc? It doesn't matter. Safe to say, most BBQ places in California use a little bit of everything, so it's a hybrid. Many people use both dry rub (Texas) to go along with vinegar-based sauces (NC) -- including myself. Just as long as it tastes good. Next time I'm in the area, I definitely want to try their beef ribs and the pulled pork sandwich.
posted by Dru at 10:56 AM