The chicken and brisket turned out great, considering it was my first time. I took notes -- made a few mistakes, but nothing earth shattering -- I now know what tweaks to make for the next smoke-out. I smoked the chicken breasts about 4 hours, which may seem long to most people, but it turned out to be the right move in my case. I smoked the brisket for about 8 hours, but I had to do something to it after removing it from the WSM. Read more >> 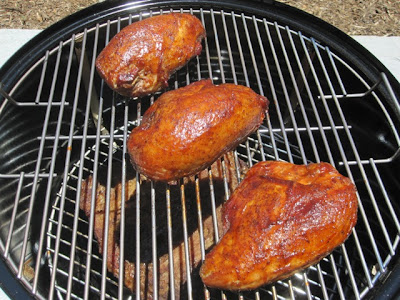 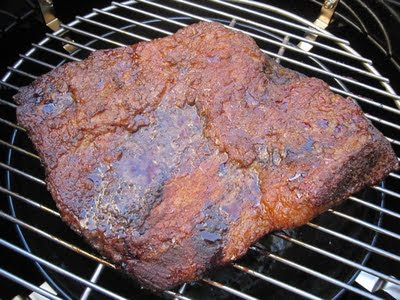 My biggest mistake was not using enough charcoal. I thought lighting up an almost-full chimney starter's worth of coals was plenty, but it was not -- not if I planned on smoking for a good 8 hours plus. I was basically using the owner's manual method, which is adding more charcoals along the way during the smoking process. I found out the hard way, the temperature was inconsistent and would drop all the way to 150 degrees F. I wanted to keep a steady temperature of at least 200 - 225. Next time, I will use something closer to the Minion method, which puts hot charcoal on top of unlit charcoal -- perfect for smoking over a long period of time, like overnight.

With a smaller amount of charcoal, the chicken breasts still came out moist and juicy with a nice smoky flavor. The smoked flavor wasn't overpowering, and I definitely can taste the "fruity" smoke from the apple wood. I liked seeing that slight pink tone to the meat -- not raw, just an effect from the smoking process. I thought using the bone-in chicken breasts helped in keeping the meat tender, as opposed to just using the boneless kind. 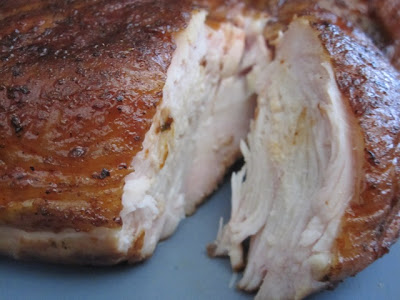 After about 8 hours and a deteriorating pile of charcoal ash, I decided to take out the brisket and see if it was ready. Going by the 1.5 hours/per pound rule, I figured the brisket should be ready. After waiting to let the brisket rest and let the juices redistribute, I cut a small slice against the grain for the taste test. The verdict? Nice smoke ring, loved the flavor... but, it wasn't quite tender enough. So I wrapped it in foil and threw it in the oven for 225 degrees for another couple of hours.

The BBQ smoked smell permeated throughout the house. Those couple of hours in the oven did the trick, with just the right amount of tenderness and texture without being overcooked. On the exterior, it didn't quite have that really dark charred, almost black, meteor look that I was going for. But perhaps I can achieve that with more charcoal and longer smoke time. For the interior, I couldn't help but smile when I saw that pink smoke ring. 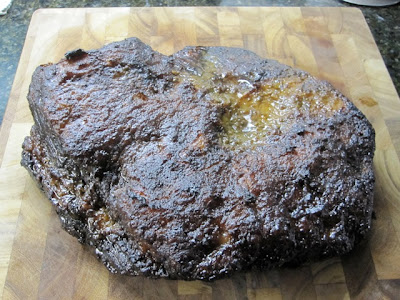 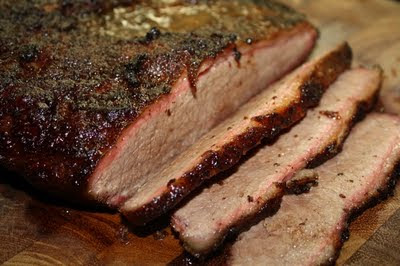 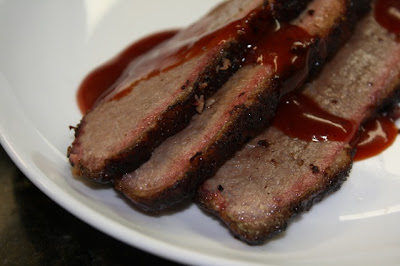 I even threw some brisket slices on the griddle to give it that added grill flavor. Along with some BBQ sauce and a roasted garlic loaf, I managed to make my own brisket sandwich. I would say that my first BBQ smokin' experience was a success. BBQ isn't an exact science, so it's learn-as-you-go. Every cooking experience, every smoking session, and every taste-testing is invaluable. Even mistakes taste good. 'Til next time... ribs and pulled pork. Can't wait. 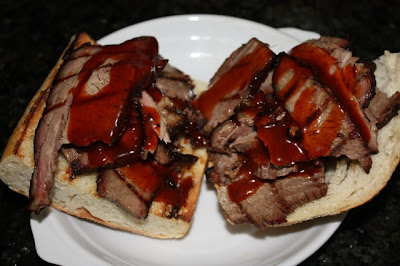 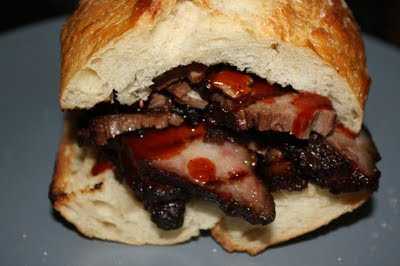