I was walking around the mall over the weekend, strolled by William Sonoma, and saw a huge poster on the front window -- it was sign with the words "BBQ" and two dudes standing in front of it. After squinting for a few more seconds, those two dudes looked like the Voltaggio brothers of Top Chef fame. Interesting... and confusing at the same time. What was the point of the poster? Were they launching their own brand of BBQ tools for the store? Were they going to start doing BBQ demos? When one thinks of BBQ, William Sonoma isn't exactly the first thing that pops into mind. 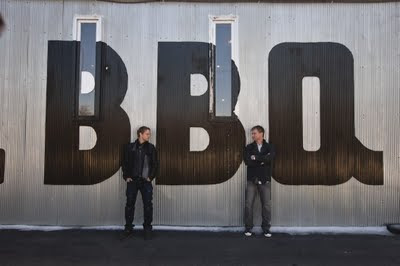 So I did some research, and apparently the Voltaggio brothers did a "Fire and Smoke Tour" several months back, sponsored by... who else? William Sonoma. They went on 4-city tour sampling the country's different types of BBQ. Stops included Wilbur's in Goldsboro, North Carolina; Oklahoma Joe's in Kansas City, Kansas; Smitty's Market in Lockhart, Texas; and Cozy Corner in Memphis, Tennessee. On William Sonoma's blog, they posted some pictures of their trip, and will share more info as we get closer to summer -- prime-time BBQ season.

Not only are they great chefs, but they got paid to travel and eat BBQ at some of the best places in the country. Bastards!